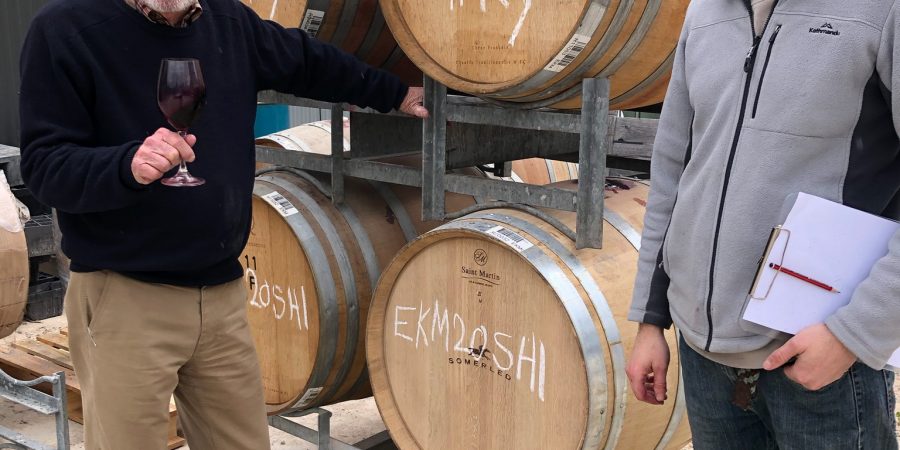 I’m feeling a bit lazy this week. I blame it on this unseasonably cold weather we’ve been having (come on Spring… where are you??!!).

So, I’m handing the reins over the Rob.

He’s been spending a bit of time out at the winery and Kim Anderson’s vineyard in Charleston this week.

Rob spent some time at the winery this week. Mostly to check in on his 2018 Shiraz and 2019 Tempranillo… they are very close to being ready for bottling!

As we’ve come to expect from Rob’s Shiraz this one is big and rich with some really lovely fruit flavours.

It’s had over 2 years in barrel now and has developed all those nice secondary flavours and aromas we love so much.

Rob is happy for this one to head down the bottling line in mid-November.

We obviously won’t be releasing these for a while, but they are bound to go quickly when we do. Keep your eyes peeled for news of their release!

All of you tempranillo lovers out there will be very happy to hear we have another vintage hot on the heels of the 2018. So you don’t have to worry about being without it again for a while! Phew!

According to Rob, the 2019 has an elegant nose and a full palate.

He was particularly interested to see if this one was also ready for bottle. And although it has “only” (!) has 18 months in barrel, Rob was very pleased to see that it too will be ready for a mid-November bottling.

Here is a lovely little video Heather took of Rob and Jackson (from Lodestone) tasting the 2020 Shiraz from barrel. It will tell you everything you need to know…

(PS. that’s the last time I leave Heather in charge of the video!!)

He also checked in with the 2020 Chardonnay which is still working its way through malolactic fermentation.

Out of the seven barrels, only one of them has finished secondary fermentation.

When this happens, there is a nifty little trick that winemakers can use to help encourage the rest of them along.

Basically all that means, is that they add some of the wine from the one barrel which has completed MLF to the other six barrels which haven’t finished. Obviously, that one barrel contains lots of lovely malo bugs, so a few extra bugs in the other barrels are just going to give those ones an extra helping hand.

Rob was able to sneak enough of the 2018 Shiraz to make our new Sparkling Shiraz!

Our 2016 Sparkling Shiraz fans out there will know that they are few and far between these days, so this news should be music to your ears!

It was bottled yesterday and had some more yeast and grape juice added to start the secondary fermentation which will create those teeny tiny bubbles.

That should take around 6 weeks. But they’ll leave it for a couple more just to make sure it’s completely finished.

Then it will sit for another week or so before the bottles will be “shaken down” and disgorging can begin.

The Shiraz is so big and rich it doesn’t benefit from that yeast contact in bottle like the Sparkling Pinot does. Even if you left it on lees for a while, you wouldn’t even notice the difference.

So, Rob is hopeful that we are on track for a January or February disgorging. Yippee!

Rob had a wander around the vineyard with Kim Anderson at Charleston on Wednesday.

It was a beautiful sunny day (ok, so Spring made a very brief appearance) and Rob said it was so nice to look out across the beautiful new growth throughout the vineyard.

But let’s leave the details for another day, ok?

I’ve promised (on several occasions I think?) to do a full report from the vineyard at some stage, so I am officially putting it on my list of things to do over the next two weeks.

I expect you to hold me accountable!