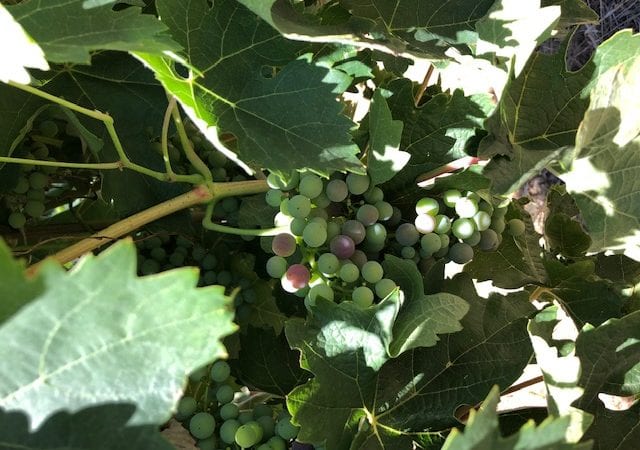 After a tough start to the growing season, viticulturalists around the Adelaide Hills are breathing a collective sigh of relief as the vines show the very first hints of a very important stage – VERAISON.

Thinking back to our discussion about growth stages a few weeks back, it appears as if most vines in the Hills have reached E-L stage 35.

So, what’s so important about this stage?

…pronounced verr-ray-zon, is very much the turning point in a vine’s annual lifecycle. At this stage, the vine changes its focus from energy creation (via photosynthesis) to energy consumption.

Before veraison begins, the berries are still very small, hard, acidic and green (due to the presence of chlorophyll). At E-L stage 35, the vine starts to move its energy stores from the roots and leaves into the berries. The chlorophyll is converted to anthocyanins (in red varieties) or carotenoids (in white varieties), sugars and other compounds, many of which are the precursors to the flavours and aromas which we can taste in the resulting wine.

For grape growers, veraison is an important time because it signals a change in the way they care for their vines. They’ll start thinking about trimming leaves, keeping watering to a minimum and thining out bunches.

Kim Anderson at our Summertown vineyard is very happy with how healthy his vines are looking at the moment. The season so far has been really hard going for Kim and he’s put a lot of work in to make sure the vines have made it this far… relatively unscathed. You can obviously see signs of damage throughout the vineyard – from the frosts, the hail and the heat, but it could have been much worse if Kim hadn’t been on top of managing the crop.

And while the temperatures of late have been horrendous, we’re actually pretty lucky here in the Hills as there have also been periods of cooler weather which enable vines to recover between the hot periods. 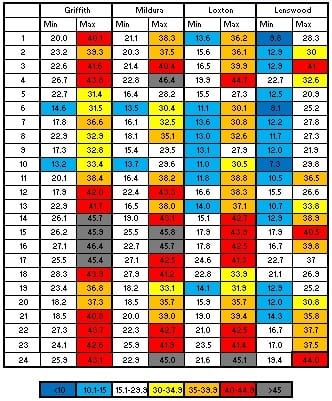 Compare this to what has been happening in inland regions of South Australia. Check out this chart I found in last week’s Crop Report from Hamilton Viticulture…

What on earth have WE been complaining about? All you need is a bit of perspective really!

Despite the current BOM outlook for the next three months is for hotter and dryer conditions than the Long-term Average hopefully, we will continue to experience short bursts of heat rather than extensive heat waves.

…. and spare a thought for poor Lucy who is jetting her way to New York as we speak. Where the top today will be a balmy -8 degrees Celcius!

One Reply to “A turning point…”