What a lovely sunny winter day we’ve just had! And what a perfect time to start the arduous task of pruning grapevines. If you’re driving around the Adelaide Hills, you’ll definitely see a bit of it going on at the moment.

Some growers like to get in early (and get it over and done with!) while others like to wait as long as possible. You see, the idea is, the later you leave pruning the later budburst will occur. In cool climates (like the Hills) this could mean missing an early frost, which if 2019 taught us anything, is a very good thing!

Whatever the timing, there are two main ways to prune grapevines… 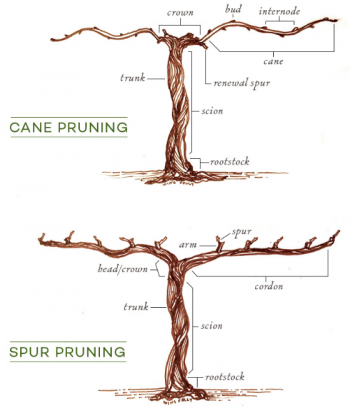 Cane pruning is commonly used in cooler climate growing regions. By limiting the vine’s lignified growth (the hard brown part) to just the trunk, the vine is less vulnerable to frost and better protected than spur pruned vines. Cane pruning takes great skill to do well because it requires manually cutting back nearly all the vine’s prior growth and correctly selecting a single cane (or two) that will be responsible for next season’s production. It has been adopted by many of the world’s most prestigious wine growing areas.

Spur pruning is common in warmer climate growing regions. Spur pruning is done on vines that retain one or two pairs of long canes (a permanent cordon) trained along a trellis system. Each winter, new canes that have grown along the permanent cordon are cut back to a small shoot containing two buds, known as a spur. In spring new growth develops from the buds on the spur. Spur pruning is a more traditional training method that is known to produce outstanding old vine wines.

Cane pruning is very time-consuming and expensive, so why do it?

As you can probably guess, there are a couple of really good reasons… 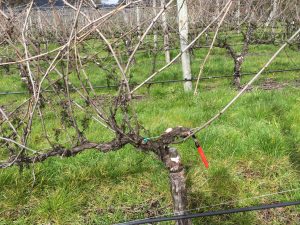 It also often becomes a necessary job anyway when spur positions get damaged and then leave large gaps along the thick horizontal branches (cordon arm) – as you can see in this photo.

The vine in this photo is in the process of being converted from spur to cane pruning. It is still spur pruned on the left side of the “V” (or crown – which is much more pronounced on the vines behind).

What about machine pruning?

Yes, grapevines can be pruned mechanically. It’s much quicker and easier and can significantly cut the costs associated with pruning. However, it also means less control over the process. Less control over the final yield and quality of the fruit. The costs should be weighed up against the benefits when making a decision about pruning by machine.

Often growers will do the first trim (called the pre-prune) with a machine. Then come in with the hired help to do the final prune.

Rob spend yesterday out at Lodestone, putting some all-important finishing touches on three of our upcoming wines…

2019 Sauvignon Blanc: which is still looking terrific – fresh and soft. It is currently being cold stabilised. But then, after a quick filtration, it is off to the bottling line. It hs a fairly high level of carbon dioxide but Rob has a nifty trick up his sleeve to bring that down before bottling. It’s called “sparging”…

Sparging refers to the process of applying nitrogen in the form of very fine bubbles in order to remove dissolved oxygen from the wine. This helps improve the wine’s taste and shelf life. The process of nitrogen sparging also helps remove volatile contaminants.

2018 Chardonnay: has lovely colour and its usual complex nose.  It is about to cold-stabilised. Then off for a final filtration before bottling. 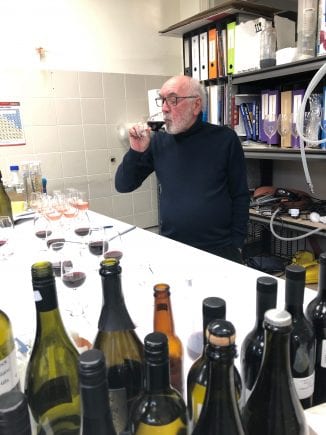 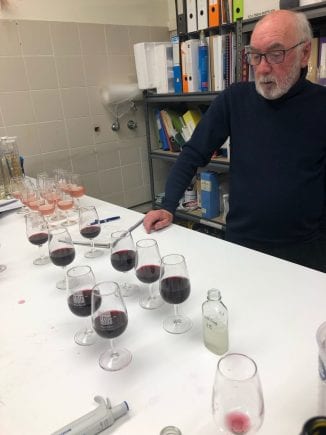 2018 Pinot Noir: It is really dark for a Pinot. Rob thinks that the only explanation is vintage variation. It has a lovely perfumed nose and soft long palate. Quite a wine!

Much of Rob’s time at the winery today was spent figuring out the best fining agent to clarify this wine. Here are a couple of photos of him going through this “fining trial”. It is super important to the final taste and quality of the wine to find the right fining agent and at the right quantity. It’s amazing how much some fining agents (depending on the wine) can alter the taste of the resulting wine. This is just another step in the process where Rob’s years of experience are put to good use!

If you need a reminder what fining, stabilising and filtration are all about, check out this post from earlier in the year.