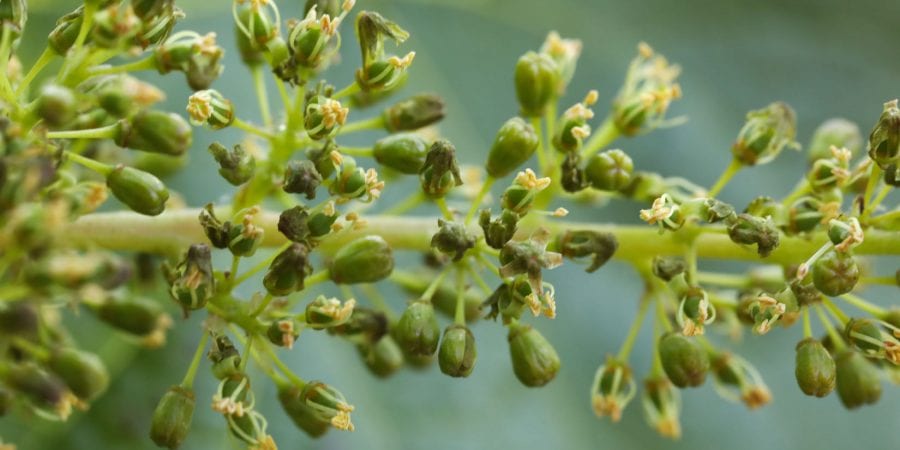 … not to mention the wind and the hail and the snow (yes, I just saw on the news that it is snowing in Falls Creek!)!

So, here we are talking about the weather AGAIN this week.

What does it all mean for our vineyards? Let’s take a look…

Rain is obviously a good thing. But as we saw when we discussed downy mildew, too much at the wrong time can cause serious problems.

According to the Bureau of Meteorology, Mount Lofty recorded 37.6 mm rain in the 24 hour period from 9 am Wednesday to 9 am Thursday this week. And while that is a lot of rain, it’s not quite as bad as I expected it to be (it seemed like we had a heck of a lot more to me!).

However, when a heavy downpour occurs during flowering (which is right about now in the Adelaide Hills), it can cause something called “stuck caps”. 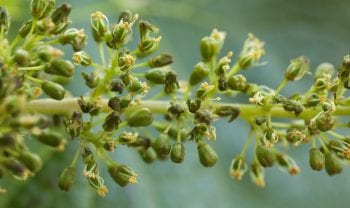 The flower parts of a vine are contained inside a “cap”. These normally fall off at the start of flowering to reveal the reproductive parts of the flower.

You can see in this photo on the left a bunch in the process of flowering – some caps have fallen off (to reveal the yellow filaments of the reproductive organs) and some of the caps still remain intact.

Heavy rain can cause these caps to remain “stuck” onto the flower. Meaning they never fall off.

Botrytis cinerea is one of number of different fungi that can cause bunch rot in grapevines. Botrytis rot is a weather-driven disease that can cause significant loss of grape yield and quality.

Spores of botrytis are almost always present in vineyards. Infection can be initiated from spores carried over from the previous season. Important sources of infection in growing vines are infected damaged leaves, decaying floral parts (mainly caps) and aborted and rotting berries.

The fungus can rest in a quiet (latent) state and then resume growth when the developing berry begins to soften. After latent botrytis resumes its invasion of a grape berry, it can then spread from berry to berry, which is especially rapid in compact bunches of thin-skinned varieties. It also spreads readily from bunch to bunch in crowded fruit zones.

In other words… not good!

Hail can physically damage the leaves, shoots and flowers or young berries. So depending on what stage the vines are at, hail can be devastating for grape production. In the Adelaide Hills, some of our early varieties have finished flowering and already have young berries.

So what effect does damage to each of these parts have on overall vine health?

The Bureau reported that Mount Lofty had wind gusts of up to 80km/hr on Wednesday night! Imagine you’re a freshly flowering bunch or berry on a grapevine. Being thrashed about by strong winds, rubbing up against wires and other parts of the vine isn’t going to be great for your health and well-being!

Just like hail, wind can be just as damaging to leaves, shoots and berries.

If it’s too cold (like the cold that makes you want to light the fire in November!), it can upset the flowering process of the grapevine. Early varieties in the Adelaide Hills are luckily all through flowering. However, varieties such as Shiraz and Cabernet, which haven’t quite finished, could be affected by the temperatures of late.

The annual growth cycle of grapevines is the process that takes place in the vineyard each year, beginning with bud-burst in the spring and culminating with leaf fall in autumn followed by winter dormancy (remind me to come back to the full story of the growth stages another day). 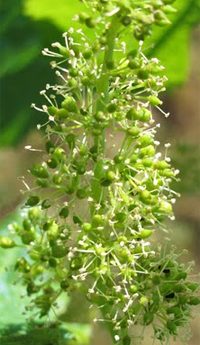 Depending on specific vineyard temperatures, 40-80 days after bud-burst the process of flowering begins with small flower clusters appearing on the shoots.

Flowering occurs when average daily temperatures stay between 15-20°C and once each shoot has reached a certain growth stage. 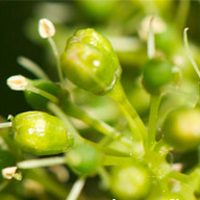 A few weeks after the initial clusters appear, the flowers start to grow in size with individual flowers becoming visible. It is during this stage of flowering that the pollination and fertilization of the grapevine takes place within about ten days – with the result being a grape berry.

Most grape vines are hermaphroditic which means they have both male stamens and female ovaries and are able to self-pollinate.

How about we change to topic to something a little more fun?!

EXCLUSIVE to members of our Jockey Club, this weekend we are hosting our annual Champagne Shopping Morning!

Heather will make sure each and every one of you gets one of her famous mince pies to nibble on – delicate, delicious and made from her mother Barbara’s traditional recipe.

Tiny Heather-made chicken sandwiches will be passed around (dare we say, also famous around these parts!) as well as fresh juicy local strawbs and marscapone.

A wonderful chance to stock the larder for Christmas, purchase gifts for your loved ones if you feel generous, and share a special Christmas morning with us!

We literally only have a couple of spots left. So make sure you book yours in now!