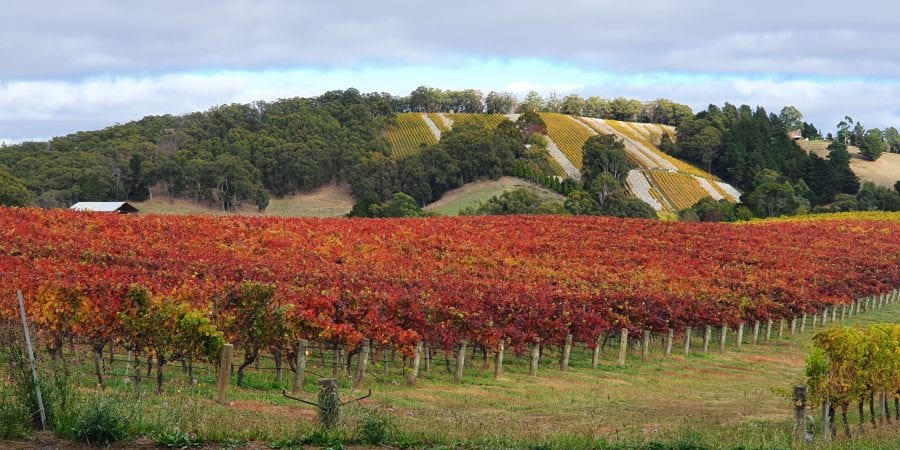 Have I told you how much I love the Adelaide Hills?

Especially in Autumn. Wood fires, red wine and all those beautiful autumnal colours. Does it get any better?!

And while that colourful show is coming to an end as we head into winter, we should briefly chat about what happens to the vines at the end of the growing season. And what does all that colour mean?

Is it a natural part of the growing cycle of the vine? Or could it be a sign of something more sinister?

Before I go on though, can we just pause for a second to admire this amazing photo of a prominent Australian wine region…! 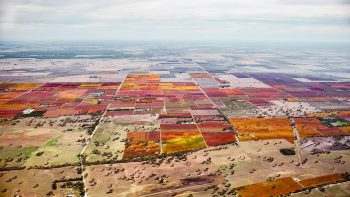 We’ll come back to this in a bit.

So, what is actually happening inside the plant when the leaves change colour?

It’s got a fancy name called…

Senescence is simply the process of ageing in plants.

In grapevines, the harvesting of the fruit sets off the release of certain hormones designed to start this process. Chlorophyll in the leaves (the stuff that makes them green) is degraded during senescence and reveals carotenoids – they are the organic compounds that give things like corn, pumpkin and tomatoes their yellow, orange and red colour. The colours of Autumn!

Leaf senescence has the important function of recycling nutrients (mostly nitrogen), to growing and storage organs of deciduous plants. So, in grapevines, those important nutrients are sent to the trunk and roots. This keeps the vines alive and healthy over Winter ready to do its important work again in Spring. 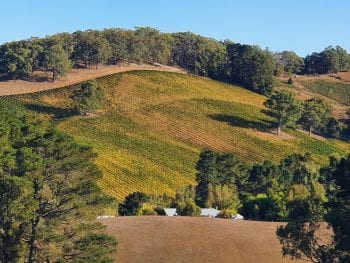 Environmental stress can bring on senescence early. You can see in this photo I took last year (right) that the colour isn’t even across the vineyard. The main reason for that is probably water-stress and difference in the soil across the site. 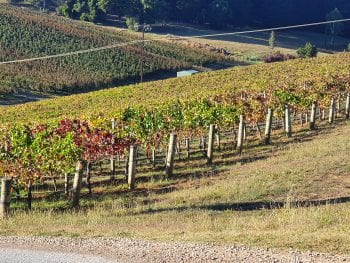 And check out this photo (left). It seems like just one of those vines is a lot further along the senescence timeline than the others. There could be a couple of reasons for that – mechanical damage (a whack from a tractor perhaps?) or it could have a virus…

I’ve got some bad news for you.

Even though those vibrant reds you see in vineyards at this time of year are pretty spectacular, it is usually a sign that the vines aren’t well.

A handful of more obscure varieties (grown in only very small amounts throughout Australia) do naturally turn red in Autumn. But most only turn yellow, orange and brown.

Along with the downward roll of leaves at the edges, the bright red colour is an indicator that the vines are infected by Grapevine Leafroll-associated Virus (GLRaV). As you can see from this great photo I found on the Wine Australia website, everything but the veins of the leaf turn red… so it’s pretty easy to spot up close. 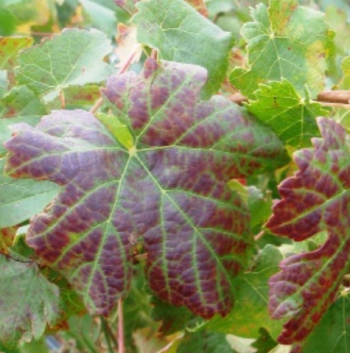 And from a distance…?

Well, it looks a lot like that picture I showed you at the start. Yes, that’s a gorgeous photo… but it also tells a rather sad story of a region affected badly by a significant problem for the wine industry around the world.

And while GLRaV doesn’t kill vines, it does affect yields and longevity of the vines.

Let’s move on to something just as red, but a little more positive…

It’s back… for real!

A couple of weeks back I wrote about the imminent return of our Sparkling Shiraz. And I’m happy to say that it has finally found its way to the cellar Bar and is ready for your glass!

Why not pop in over the weekend for a taste?! Or grab yourself a bottle or two now!