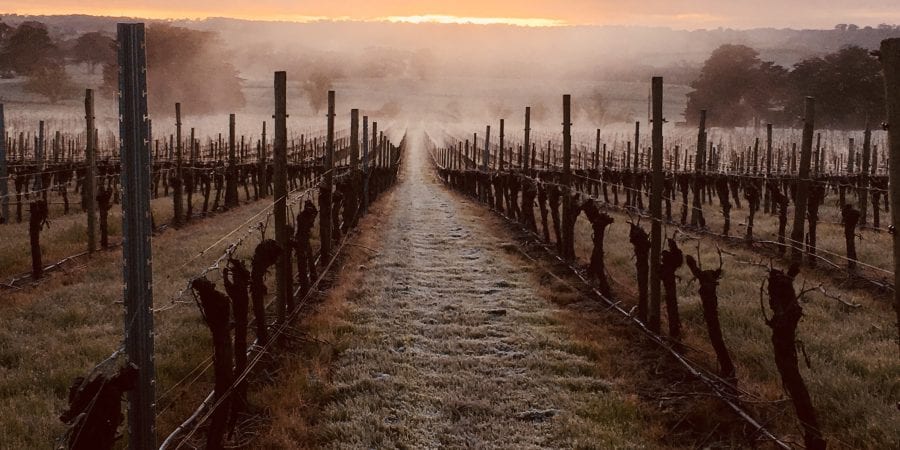 This week, I thought we should put on our facemasks and go on a little virtual overseas trip. Rob’s got everything in hand at the winery, so why not treat ourselves?!

While touring around the vineyards of France sounds like a fun thing to do, the vineyards themselves aren’t having a great time at the moment.

Back on the 7th and 8th April, France experienced particularly severe frosts throughout many of its wine regions. Temperatures plunged as low as -5 degrees Celsius overnight in regions including Chablis, Burgundy, and Bordeaux. Some affected regions don’t normally experience frosts and given the timing, it has been devastating to the industry. According to France’s largest agricultural union, Fédération Nationale des Syndicats d’Exploitants Agricoles (FNSEA), losses are estimated to total as much as €2bn. This represents at least a third of French wine production.

And why has it been so devastating?

The unseasonal wave of bitter frost and ice hit suddenly after a bout of warm weather. The warmth had encouraged vines to develop earlier than usual, only for the frost to come along and undo all the good.

Despite doing everything they could to protect their vines (we’ll come to this in a bit), some growers are reporting losses of 100%.

A severe cold spell in April 2017 damaged vineyards so much that the annual French wine output was the lowest in history. Frosts had also caused damage in 2016 and again in 2019.

So, it doesn’t look like this problem is going away any time soon (let’s leave the climate change discussion for another day though!).

The problem with frost…

Cold air around newly formed buds on the vine is one of the biggest concerns for a vineyard manager. If the temperature drops below zero degrees Celsius, as it does during a frost, the vines essentially get frostbite. The sap within the bud freezes and causes cells within the bud to burst. They look as if they have been burnt. It destroys the new shoot and the tiny bunches of grapes within.

What can growers do to protect their vines from frost?

The Europeans tend to start by lighting a few fires!

Hundreds of them in fact. 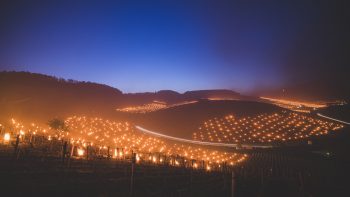 Candles (big ones called bougies) and burning bales of hay give off enough heat to create air movement which prevents a frost pocket from forming.

Helicopters can do the same job, but it’s obviously more expensive in the long terms. 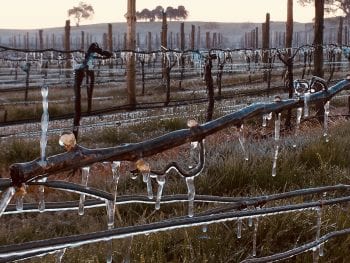 Check out the “ice igloos” around the individual buds in this photo from Kim Anderson’s vineyard a few years ago. The ice will protect the buds as long as the sprinklers run through the duration of the frost, plus the hour after sunrise (when the frost is at its worst).

Other ways to protect against frost…

Let’s hope that the news from France isn’t as bad as they’re predicting. The coming weeks will tell.

Sadly though,  it doesn’t sound an awful lot like if you do manage to get your hands on a 2021 French wine, it’s going to be pretty rare. 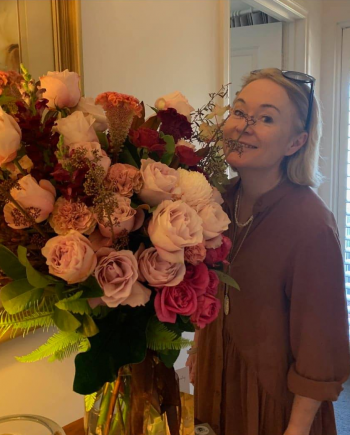 Emma made the long trek home from New York last month to celebrate an extra special birthday. She had a lovely day with the immediate family on her actual birthday (yesterday) and the celebration will continue tonight at the Cellar Bar (sorry we’ll be shutting a little earlier tonight!).

(… here she is hiding behind some flowers)