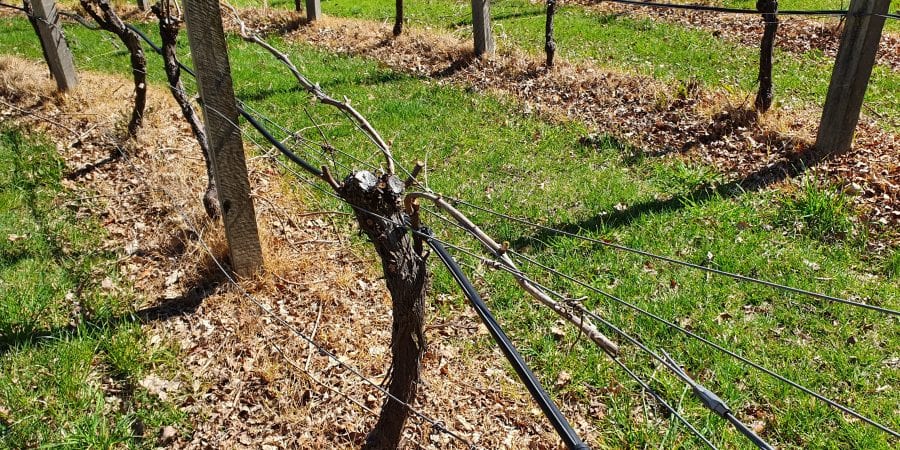 In an attempt to make up for last week, I’m setting myself a challenge.

This week, I am going to delve into a topic that has never been my strong suit…

Around nowish (some growers may have already done it, others may not have got there yet) is a great time to start assessing the viability of buds on the grapevine.  (Don’t get too bogged down in that yet… I’ll explain further later.)

Growers do this every year… it helps them to decide how to prune the vines.

This year though, it is even more important. With the bushfires affecting so much of the Adelaide Hills grape growing region late last year, it’s time to see if those precious buds have been affected by this major stress. How many of them are still alive and ready to do their important work for the next growing season?

After a crash course with my resident viticulturist over breakfast, I THINK I finally have my head around it. So, now I’m going to explain it to you!

This could either be a complete disaster or we both might end up learning something!

Even if you’re not prepared to come on this journey of enlightenment with me, make sure you speed read to the bottom of this post. I have a favour to ask…

I think the thing that I struggled to get my head around the most is that the buds that will form THIS year’s growth (all the shoots, leaves and bunches for Vintage 2021) were formed during LAST year’s growing season.

But while that’s all very clever and such, the problem is that any stressful events occurring in Year 1 will potentially affect what sort of crop you end up with in Year 2.

You can probably see where I’m going with this now…

The bushfires that rampaged through on December 20 (smack bang in the middle of the growing season) is going to be one heck of a big stress for the poor vines not only in that year, but also for this coming year (if the vines survived at all).

Here are some close-up photos of some nodes…

Other than waiting for each bud to burst (or not) in Spring, the only way to tell if a bud is alive (or viable) is to cut it open and have a look. But of course, then that bud is no longer viable because you just killed it by cutting it open to have a look! So the idea is to collect a representative sample of canes from the vine and across the vineyard to determine how much damage (if any) has been sustained.

Instead of risking the amputation of my own finger, I scoured youtube to find someone who already risked theirs to show you how this is done…

The sub-zero temperatures were obviously the stressor in this example, but the same principle applies to our bushfire affected vines.

The representative sample is a pretty good indication as to what is happening in the vines.

And this information is going to be super important when it comes time to making decisions about how to prune the vines.

Pruning is another one of those topics which I find hard to get my head around and I’m not going into that today. If you want to read up on it, check out this post where I try to make sense of it (with another video I “borrowed” from youtube).

As Jackie shows us in her video there are some generally accepted ranges that help growers decide how many nodes to leave on the cane. If the buds have been significantly damaged, then the idea is to get at least one of those buds to burst in spring.

I haven’t seen any bud viability reports from the Adelaide Hills yet. While to the untrained eye, it looks like some of the not too severely affected vines have recovered well, it’s all going to come down to the results of this next lot of tests to determine what crops will look like for 2021.

Play along at home!

We’ve been doing a bit of dining out at home lately. Many of our beautiful Adelaide Hills restaurants have been keeping us fed with take-away options of their delicious dine-in meals. And I’m sure wherever you’re reading this, your local eateries have been doing the same.

And of course, any good dining experience needs a good wine to go along with it.

Next week, I thought I would tackle the tricky topic of wine and food matching.

And I would love to work with some real-life examples.

Send me your recent food and wine (preferably Somerled, but we understand you drink other wine every now and then) matching triumphs and I’ll attempt to explain why it worked so well!

WARNING: I am not a food and wine matching expert, so this too could end in disaster!