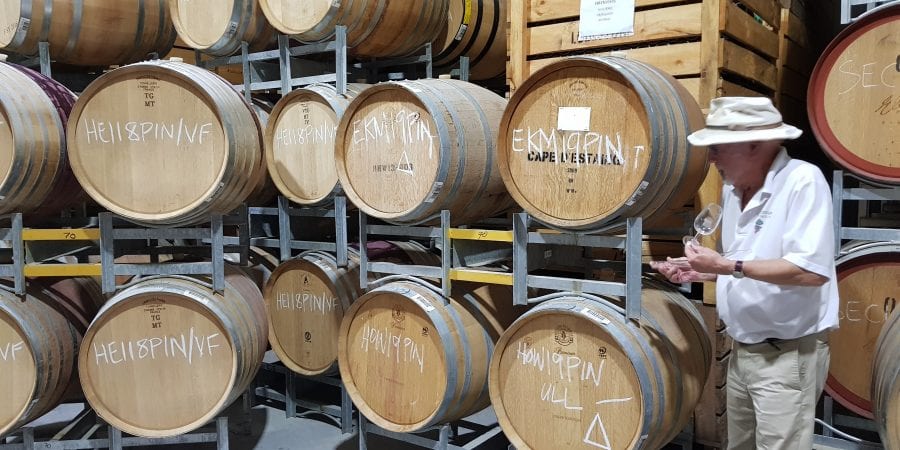 If you’ve been following along with our weekly updates, then you would be right to expect some news on how our Tempranillo picking went this week.

If you’ve been following along with our weekly updates, then you would also know that not everything goes according to plan. Especially if you’re talking about vintage 2019!

This time last week, it was looking pretty likely that at least half of the grapes destined to become our 2019 Picnic Races Tempranillo would be ready for hand-picking on Wednesday. By a crack team of avid Somerled supporters none-the-less!

And the pickers have been called off for another week! Told you things in this industry can be a little unpredictable.

The ups and downs…

It didn’t seem like that long ago that vintage was racing ahead faster than most of us had expected. The relentless heat and absence of rain ripened early varieties at break-neck speed and pushed Baumé results through the roof.

Then we had that nice period of warm sunny days and cool nights which settled everything down.

And now? The sudden burst of rain and cooler weather earlier in the week has sent Baumé readings in the opposite direction.

But that’s not a bad thing. With more rain predicted this weekend, the added moisture will help replenish dry soils. The cooler weather is also a welcome change as this will allow for concentration of flavour and sugar in the grapes.

Usually, heavy rain at this stage of the season is not a welcome sight for grape growers. It can mean a dilution of flavour in the grapes along with the threat of disease from burst berries. Luckily though, because we’ve had such little rain until now, there isn’t enough baseline moisture in the soil. The vines will just be getting a nice long hard-earned drink (did someone say drink? It’s 5 o’clock somewhere, right?!)!

An interesting side note:

..while we’re on the topic of dropping Baumé readings.

A few weeks ago vineyards across the region were reporting drops in Baume despite the fact that it hadn’t rained (in what was beginning to feel like forever).

Cast your mind back… long hot days and nights gave way to more seasonally appropriate weather. Milder days and cool nights provided optimal conditions for grape flavour development. And a sigh of relief could be heard across the Hills.

Interestingly many vineyards reported a decrease in sugar levels (of up to 1 Baumé) as compared to the previous week where increases of up to 2.5 Baumé were recorded.

Those changes were likely due to restricted vine access to soil moisture under dry conditions. Let me explain…

Under warm conditions, vine water loss to photosynthesis/transpiration was not able to keep up with moisture availability. This results in competition for hydration between shoots and grapes. Berries became dehydrated, thereby concentrating sugar content. This gave an apparent increase in the rate of sugar accumulation.

The onset of cooler conditions saw vines returning to equilibrium in moisture demand and availability. This allowed berries to return to normal moisture content, together with an apparent dilution of sugar. 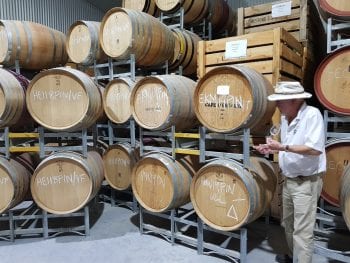 Things are progressing a little less unpredictably in the winery under Rob’s expert guidance.

Our Sauvignon Blanc and Sparkling Pinot base (the base wine which will become our sparkling Pinot!) are both at zero Baumé. When a ferment gets to this stage, the lab needs to run a more involved test to check that it is sugar dry.

Sugar Dry:  This just means that all of the fermentable sugars (being glucose and fructose) are below 1 g/L (or 0.1%). There comes a point in the fermentation that measuring the Baumé is no longer sensitive enough to determine the point when the fermentation has stopped, and the wine is considered dry. That is when the laboratory needs to use much more specific tests such as enzymatic assays or High Performance Liquid Chromatography (HPLC for short, because let’s face it, that’s a mouthful!).

The lab is all set to run that test tomorrow.

The Pinot Noir dry red is already sugar dry and the malolactic fermentation (MLF) bugs (technical term) have been added to the barrels.

As some of you may remember, MLF is that secondary bacterial fermentation that Rob loves. Take a quick look back at this post to refresh your memory – however, I’ll probably revisit this in the coming weeks, so stay tuned.