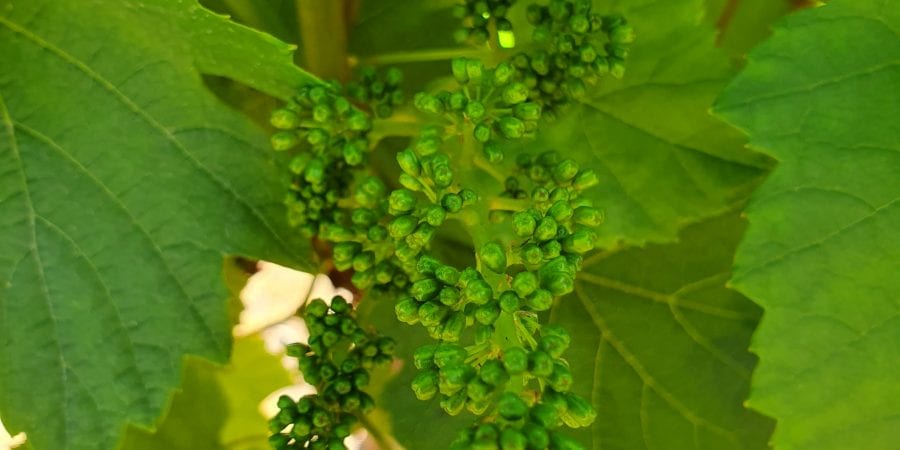 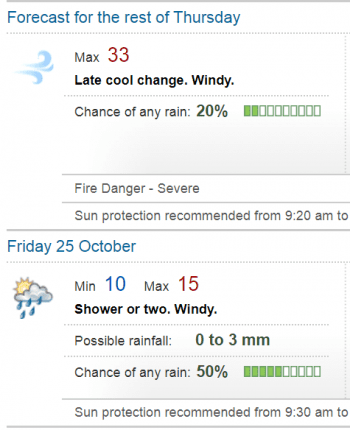 Ahhh Spring! How I love the way you keep me rotating through both my winter AND summer wardrobes in the same week! Sometimes in the same day!

The weather was so nice yesterday though, that I took a walk. I took a walk through that little block of vines down in Adelaide.

Not only did I get a nice dose of Vitamin D, but I also learned a couple of things while I was there.

Let’s take a look at a few of those things now (so I can claim my walk as a work expense!)…

Which is exactly what they should be doing right now. And all that glorious sunshine and warm temperatures have certainly been helping.

Check out the size of this leaf… (and I have big hands!)! 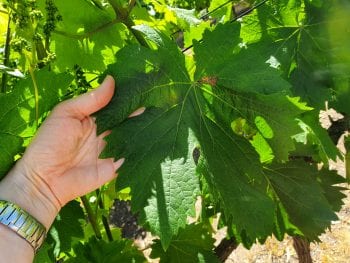 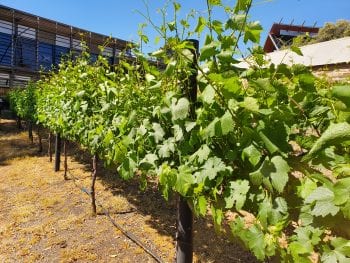 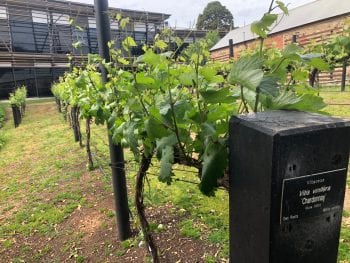 It will be interesting though to see what effect the cold snap we have coming up this weekend will have. Tune in next week to see!

Now, it would be easy to assume that this early stage of the growing season is the easy bit. You just let the vines do their thing, right? Wrong.

The more I learn about viticulture the more I understand that it’s such a delicate balancing act right throughout the season. Making the wrong decision early could have a detrimental impact on the fruit and the wine it makes.

Shoot thinning is one of those important decision points.

It might seem crazy to go and cut back a whole heap of new growth so early in the season, but that’s exactly what a lot of growers will be thinking of doing right about now. 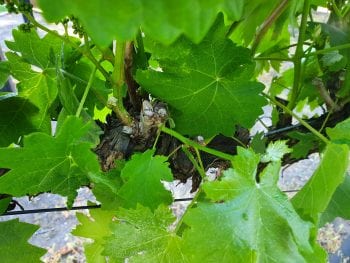 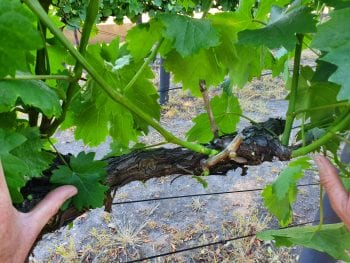 It gives the vines a chance to focus all their energy on just a couple of shoots (and the berries on those shoots).

Although this means that the final yield will be less, the payoff is that the flavour in the grapes will potentially be better.

Shoot thinning also promotes a more open canopy. That means that each bunch of grapes will be exposed to more sunlight and will ripen quicker. And for somewhere like the Adelaide Hills, this is super important. Especially for mid- to late-ripening varieties. The quicker the grapes ripen, the less time they are hanging on the vines and the less chance they have of being exposed to pests and diseases later in the season.

I hear some of you asking the obvious question though…

(Other than all the reasons I’ve just given you!) why on earth would a grower want to decrease his or her yield… especially if they are getting paid by the tonne?

Well, even if you decrease the number of soots by 50% the yield will not decrease by the same amount. The vines will compensate by grower bigger berries. And if the fruit is better quality then that’s a win/win for everyone.

After a bit of searching, I managed to find one or two bunches showing the first signs of flowering!

Of the twelve varieties, it was the Chardonnay which has reached this pivotal stage first. 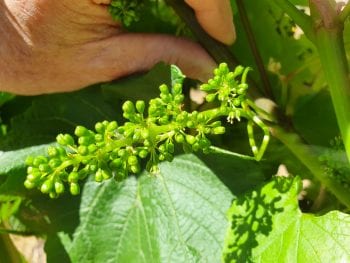 That was so yesterday though.

I managed to get another photo (from someone who takes terrible photos!) to show you what has happened in just 24 hours…

Around 50% of that bunch has now flowered!

This proves how quickly things happen in the vineyard. And how growers need to be monitoring their crop almost daily to keep up with what’s going on.

I’m not going to delve too deeply into the concept of flowering right now. If you need a refresher, I suggest you head on over to this post from last year.

That’s it for now. Tune in next week, when I’ll probably be bringing you an update from a cosy spot near the fire, wrapped up in my winter woolies!