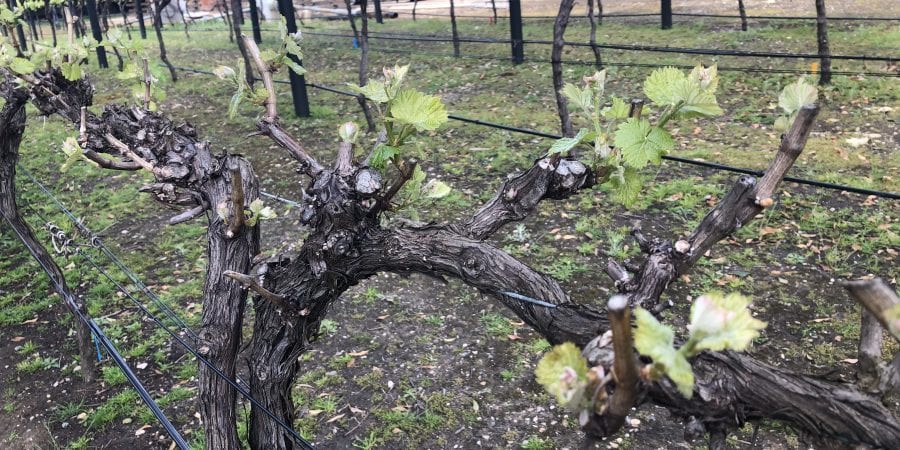 Despite the rain currently falling on my roof, it’s been feeling very Springy lately. Hands up who has been enjoying the sunshine and warmer temperatures??!

I certainly have been. And while I’ve been busy soaking up as much Vitamin D as possible, it seems I’ve missed something pretty important.

Earlier this week, in a forgotten corner of our garden, I found one of my husband’s discarded work-related experiments. Amongst the weeds were these lonely looking little vines in pots which had (at some stage) sprung to life!

If it’s happened to these neglected vines in our backyard, then it must have happened in vineyards all around the Hills as well!

What am I talking about? …BUDBURST!

The event that signifies the beginning of the growing season for 2020.

Budburst refers to the period in early spring during which grapevines emerge from dormancy to produce new shoots. Small buds on the vine will now give rise to leaves and flowers. Budburst is brought about by changes in the air and soil temperature.

Now, I know we chatted about buds back in May this year, but I don’t think it hurts to revisit the topic first. It’s a really important one, so forgive me while I recap…

As I mentioned earlier in the year, I have always struggled to get my head around this topic. And I think this is why…

The buds that will form THIS year’s growth (all the shoots, leaves and bunches for Vintage 2021) were formed during LAST year’s growing season.

Here are some (not fabulous) close-up photos of some nodes… 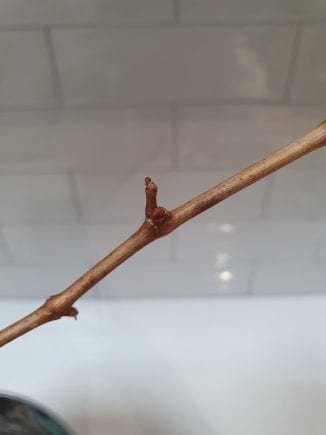 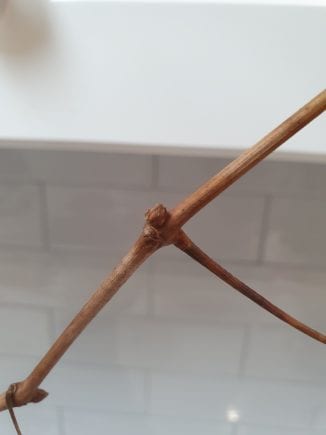 We know that towards the end of the growing season in autumn, vines lose their leaves. As temperatures decrease further, vines undergo a number of processes in preparation for ‘shutting down’ for the colder months.

Vines set themselves up with the biological equivalent of ‘anti-freeze’ to ensure live tissue remains for the renewal of growth in the following spring.

Vines are not completely inactive when dormant though. They can’t photosynthesize because they have no leaves, but they do respire (or breathe) to maintain basic metabolic functions. Their energy source at this stage is carbohydrates stored during the previous growing season, in the roots, trunk and cordons (stems/branches). Dormant vines have to exist on their stored reserves from the time they lose their leaves. The new shoot growth in spring is completely dependent on these reserves for approximately the first month.

Growth of dormant buds is the result of the commencement of the expansion of the bits and pieces we talked about earlier which pre-formed in the previous season. First, the cells inside these structures expand and then eventually the cells divide and multiply.

Lots of things affect the time of budburst including…

So, according to the Adelaide Hills Crop Watch report on September 8th (which I clearly also missed!), some vines were still dormant (Sauvignon Blanc and Cabernet Sauvignon in northern vineyards). Others (like Chardonnay in Macclesfield) had already progressed to E-L 9  (2-3 leaves separated: 2-4 cm long)!

Here is a picture (thanks to Hamilton Viticulture)… 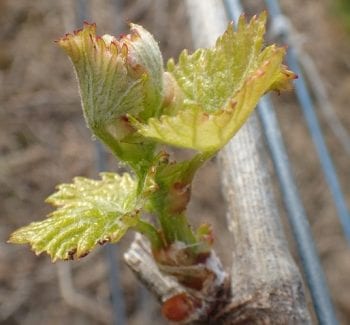 And don’t worry if you’ve forgotten what E-L stage means. I’ll revisit that in the coming weeks.

I’m also planning to check in with Kim Anderson in Charleston to see how his vines are faring after the fires late last year. Because obviously, all of this means nothing if your vines suffered a massively stressful event during last year’s growing season.

Stay tuned for that! 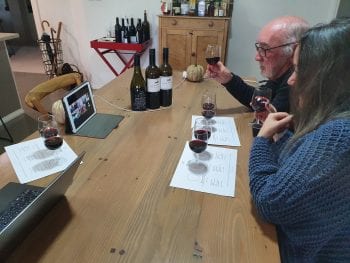 Did you get your invitation to join our inaugural live club pack tasting with Rob this weekend?

We hope you can join us live this Sunday at 6pm (Adelaide time) as Rob chats to us about the two wines in your September pack – the 2018 Chardonnay and our brand new 2020 LDR.

Feel free to open one or both of your wines to sip along with him. Otherwise, sit back, relax and be prepared to learn a thing or two from the master!

Got a question? Ask it live, type it in the chat or send it through beforehand. Rob is always happy to answer your questions.

Check your email for the zoom meeting link or send me an email if you can’t find it.

We look forward to seeing you then!

3 Replies to “How could I have missed this?!”