We’ve been talking a lot about the Adelaide Hills recently (for obvious reasons), but this week I’d like to shift the focus. So much of our country has been struggling with the impacts of bushfires and drought. So, what does this mean for wine regions across Australia?

According to Wine Australia chief executive officer Andreas Clark, most fires have been in heavily forested areas or national parks. Still, a maximum of around 1,500 hectares of vineyards fall within the fire-affected regions.

While not wanting to downplay the significance of this, Clark also says, “Even if all those vineyards were fire damaged – and they are not – it would only be about one percent of Australia’s total vineyard area.”

So… is it insensitive of me to say that’s some good news for the wine industry?

Let’s take a closer look though…

Most of the vineyards on Kangaroo Island are located in the eastern half of the island and not in fire-affected areas. Some small vineyards around Parndana (in the middle of the island) may be affected.

The fires on the east coast of Australia are primarily affecting forests and national parks, rather than wine regions. However…

In regions such as the Hunter Valley, where veraison begins in early January, and which is surrounded by bushfires, the impact of smoke taint is likely to be severe. Early testing has confirmed this.

The fires have both directly impacted the region and ongoing smoke taint is also likely to be a problem.

In Victoria, most of the fires are in the East Gippsland area. There are very few vineyards in that region.

The fires south of Albury are within the King Valley, Alpine Valleys and Beechworth wine regions. However, most of the fire damage is restricted to the border between the King and Alpine Valleys where there are very few vineyards.

Smoke taint remains a risk for these regions.

In Western Australia, the Stirling Range national park fire is located in the Great Southern wine region. There are no vineyards in or near the national park area of the region.

Queensland produces only a small amount of wine grapes (around 900 tonnes). 2020 production is likely to be a fraction of this due to drought and water shortages.

There have been no reports of fire damage to vineyards in Tasmania. It is also still too early to expect smoke taint damage.

Directly affected by the fires or not, one of the biggest potential issues for the wine sector and regional communities is reduced tourism.

Many small family businesses rely largely on tourism and winery visitation. The flow-on impacts of the grape and wine sector to these regional communities is very important to the local economies.

Andreas Clark (Wine Australia) says, “Our message is that Australia is hurting from the fires, but we are open for business. We need donations to the relief funds, support for our emergency services, and consumers to buy our wine and visit our regions.”

I have been seeing some lovely photos on social media this week. We are starting to see the first signs of life in some of our worst affected vineyards. This photo is from our friends at Tomich Wines… 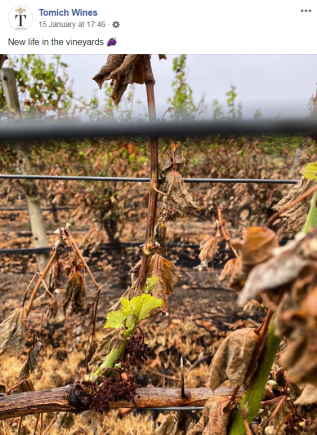 According to last week’s Crop Watch report from Hamilton Viticulture, the first signs of veraison are starting to appear throughout the Adelaide Hills! Here are some Pinot Gris grapes showing just a hint of colour…

It’s our weekend to shine…

Supporting our wine region has never been easier!

Crush Festival 2020 is here with plenty of fabulous events to choose from right across the weekend.

Including ours (with just a couple of seats still left!)! Book your tickets now!

We’ll be out in our cool breezy marquee, crushing fresh, Adelaide Hills, organic tomatoes with two of the finest in the team – our Calabrian friends, Dom & Dom from Gepetto’s at Hahndorf

A long luncheon follows all of our hard work and is included in your ticket!

Wines are by the glass, extra, at our al fresco bar.
We’ll be pouring our wines AS WELL AS those of Kim and Michelle whose grapes we buy each year, and who unfortunately suffered great damage to their Charleston vineyard in the December Cudlee Creek bushfire.

Come and join us – what a lovely day for the community! And a chance to be involved in our beautiful region after what’s been a challenging few weeks!