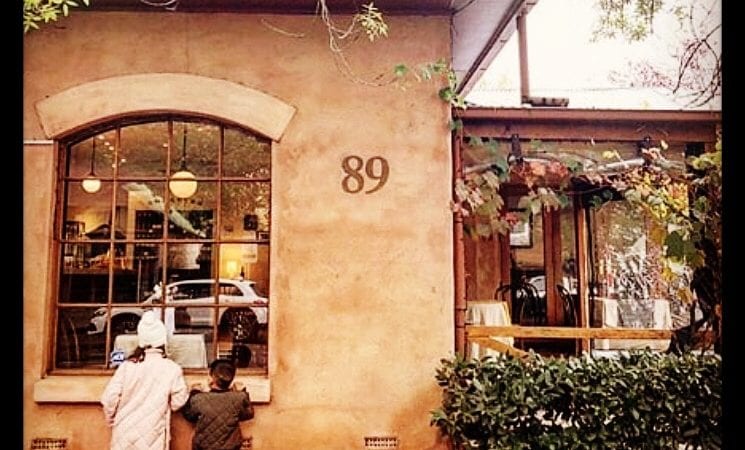 It’s as if Rob’s birthday on Wednesday wasn’t enough excitement for one week.

Yesterday marked the 9th anniversary of the official opening of Somerled Cellar Door!

So, what better time to get all nostalgic and have a look back at the last nine years (and more). I sat down with the Moodys and asked all the important questions.

But first, have a look at this cute compilation Lucy put together a few years back for our 5th birthday…

We’re all getting pretty familiar with your story Rob, but perhaps you could tell us a bit about how the cellar door came about?

It was January 2010 and Lucy had just returned from Hong Kong (where she had been working and representing Somerled, among other brands) that morning.

We were sitting on the balcony of our old house in Crafers, eating chops and drinking a lovely red from Wynns in Coonawarra.

While the Somerled Shiraz was sold into Hong Kong, we weren’t selling anything here. I was concerned that we would have to start thinking about getting serious about our sales effort in Australia. After all, if you can’t sell it then there is no point making it. It was either get serious or give up altogether! (Eeeekk! What a terrifying thought)

Given the limited options in terms of distributing wine, the best way I could see of creating an image and brand was by opening a cellar door. Somerled didn’t have a winery or a vineyard, so it occurred to me that Hahndorf would be a good place to set up shop. People tend to travel TO Hahndorf not through it (like other Hills towns).

So, over lunch that day we discussed the possibility of Lucy running the place (because Rob sure wasn’t going to do it!). Luckily Lu was enthusiastic about the idea, so literally the next day we got in the car and went for a look around Hahndorf!

The family had their eyes on a few different spots on the main street and it took them a long time to find the right spot. When they first had a look at 89 Main Street they hated it! It took them a while to see its potential. But, once they looked past the 80s decor they decided it would work perfectly. They settled on 13th May 2010.

Then the hard work began!

There were so many things they had to get their heads around quickly. Finance, building inspections, tourist figures, settlement, interior design, just to name a few. With help from family and friends, they opened the doors on Sunday 29th August 2010.

The wines remain as amazing as ever, but things continue to evolve at the cellar door. What has changed?

Well, first of all, it’s not called “Cellar Door” anymore… it’s “Somerled Cellar Bar” (or SCB as we like to say). We re-branded a few years ago to capture what it was we had become and what we wanted to offer our visitors. Without realising it, we’ve become a hang-out for locals and loyal club members alike. It’s not just about the passing parade of tourists. We wanted to create an atmosphere which is loungey and relaxing.

Rob believes that having half-glasses on the menu gives visitors a much better way of understanding the wine.

When we first started out we were only the second cellar door in the whole region to charge for our tastings (after Shaw & Smith). Originally the $5 tasting fee was refundable on purchase. Lucy recalls a super busy day at Somerled. Rob was literally running between tastings. A table of girls who had been served by Rob refused to have the tasting fee refunded. They couldn’t believe they had been served by the wine-maker and couldn’t imagine the experience not being worth at least $5! And that’s when the non-refundable penny dropped.

Charging for tasting was also a branding thing for us. We want to show visitors that we value our wine.

Although we have added new food offerings along the way, one thing that has always remained the same is the Somerled signature Spanish Platter. We had a lot of help from Say Cheese at the Central Markets to find exactly the right cheese to go with all of the wines. The aged Manchego works perfectly!

Our opening times have certainly evolved along the way. When we started we were open 10-5 every day except Tues & Weds. Then we upped it to 6pm …  Three years in we started opening until 7.30pm on Friday nights.

And then after a brief stint of extending until 7.30pm on Thursday, Friday and Saturday nights we decided to pull out all the stops in April this year. We are now officially open 7 days a week until 7.30pm each night. The street needed it. Somewhere to go for a drink before dinner when everything else had closed.

What are the roles of each of the Moody family members?

ROB: That’s a bit of an obvious one – he makes the wine we all know and love! He has the best idea about stock levels and the long term view of production.

He also gets the wood for the fire… a VERY important job (and one no one else wants to do!)

And while he spends a little less time behind the bar than he used to, you’ll still spot him later in the day with a glass in hand, ready for a chat.

Here they all are the evening after their first day of operation!

HEATHER: Heather loves money! Her father was a bank manager so it only makes sense that she’s responsible for all the banking. She also has a keen business mind and is good at coming up with practical brainwaves.

LUCY: Well, Lucy does pretty much everything else!

From the very start, she was the face of Somerled. She set the front of house tone of welcoming, friendliness and professionalism. While she doesn’t spend as much time behind the bar these days, she remains responsible for all of the “behind the scenes” stuff.  Book-keeping, marketing, event planning, strategy development and liaising with the local wine community to name a few.

Oh, and she is also responsible for coming up with all the outrageous ideas for Heather to quash. 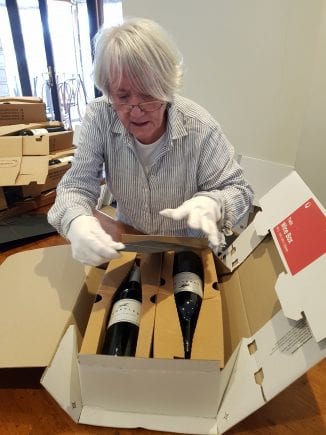 EMMA: International liaison Emma (Lucy’s sister) founded the Somerled brand with Rob. When she’s not busy with her job as Standards & Ethics Editor for the Wall Street Journal she is providing the rest of the family with moral support.

She’ll also put on an apron and polish a glass or two when she’s in town.

JILL & WAL: Rob’s sister and brother-in-law make the trek from Bordertown to help pack your Jockey Club packs (for free!) – they also have to bring their homemade sausage rolls and soups for lunch to share as well. A thoroughly one-sided arrangement.

All other staff members throughout the years have become family – Cate, Neala, Maddie, Maree, Emma, Karen, Crystal (with guest appearances from others along the way!).

How on earth do you manage to work so closely together and still get along so well?

Rob doesn’t miss a beat and answers immediately with… “Well, we don’t!”

I wait for the laughter to die down and for the proper answer to emerge. Deathly silence.

Lucy, tell us about the wine club – how it came about and how it has evolved.

When we developed the business strategy for Somerled, we knew we needed something to hook people in, so that every day didn’t rely on us making brand new customers and brand new sales.

I didn’t want it to be a schmoozy sales thing. I honestly believe that people are better off with Somerled in their lives! But when I thought about wines clubs, the things can kept springing to mind all have negative connotations.  A dozen wines arriving on your doorstep, often coming as a bit of a surprise and with no options to change the contents.

I always felt that style of wine club left members feeling taken advantage of and were difficult to escape. I spent a lot of time going around in circles trying to come up with our own offering.

It was around that time (late April 2011) that we all went to the Napa Valley for Emma’s 40th birthday. Some of Emma’s friends came too – a dozen girls and Dad! He was in his element! 12 girls and Dad touring Napa. That trip had another purpose which was to collect as much insider information as to how the wineries there managed their clubs. I was completely dismayed by all the 2-3 bottle wine clubs on offer. Why on earth would they do that? What a waste of resources.

BUT… my sister was joining up to them all. She lived on her own and that’s all she wanted. It also gave her the opportunity to be a member and try wines from several wineries, not just one or two.

It wasn’t until we went to Mumm Champagne that it all started to make sense to me. The guy there told us… “Yeah, I think we have 20,000 members. We probably get about 20 per day”. The whole way home on the plane I was madly writing and planning it all out. I had it sorted by the time we touched down!

We did our first mail-out in September that year with six deliveries! We’ve since had over 1,200 sign-ups to the Jockey Club.

And the family still pack each and every box by hand!

We’ve seen businesses come and go on the main street, what is the secret of your success?

This is when Rob, Heather and Lucy all started talking at once! They weren’t short on ideas for why Somerled has stuck around for so long. I think I got most of them…

Personally, I think the main reason for their success (other than the wines. I mean, how could they not succeed?!) is that the Moody family is by nature, extremely hospitable. Whether it be at the cellar bar or in their home (or in MY home!), they are welcoming, attentive and make it their purpose to ensure everyone is comfortable.

And comfortable we are! Here’s to many more birthdays!