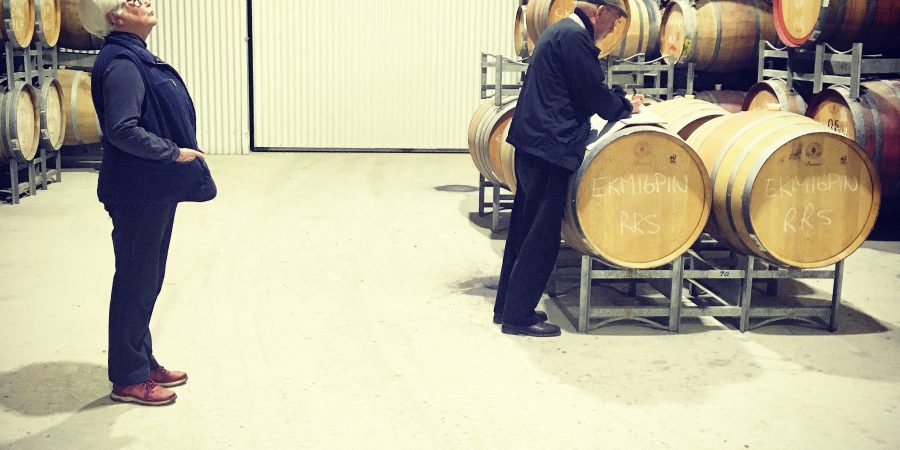 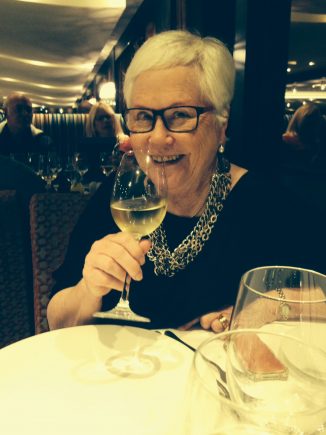 Do you know who gets off really lightly around here?

I thought it was about time I righted this wrong and turned the spotlight onto the Somerled family matriarch for a change!

What are your three most vivid memories as a winemaker’s wife?

Rob’s 1971 vintage was definitely a memorable one. It was his first as a fully-fledged winemaker (he was a trainee before that). He and Heather were living in Nuriootpa at the time, but Rob was in charge of making the Grange at the Magill winery. So, you could say she didn’t see a lot of him!

Under normal circumstances, that sort of absence is pretty hard. But this wasn’t a normal vintage for the Moodys. Firstborn Emma arrived at the end of April! As many of you would understand that is usually a pretty busy time if you’re a winemaker.

Even though that was a difficult time for both Heather and Rob, two VERY good things came out of that vintage… the 1971 Grange which won many accolades and, of course, Emma!

By the next vintage (1972) Rob was back working at the winery in Nuriootpa which they conveniently lived across the road from.

That year brought a memorable moment for Heather when she watched her husband walk across the road covered from head to toe in grape must and juice. While plunging an open fermenter of red wine, Rob lost his footing and fell in!

The proximity to home, a hot shower and some clean clothes came in handy that day. Although I’m sure the walk of shame across the road felt a lot longer than it actually was for Rob. And it did not go unnoticed by some members of the small town community. Word certainly got around fast!

In the late 1980s, Rob won the Warren Winiarski Trophy for top cabernet (specifically the Wynns Coonawarra Estate John Riddoch Cabernet Sauvignon). He was invited to attend the London Wine Competition awards ceremony at the House of Commons. He did attend, but without Heather by his side!

You see, at that time, Heather was teaching French at Glenunga High School and the Education Department would not approve her leave! The awards ceremony was held the week after school holidays and she was told that if she wanted that week off, she’d have to take the whole month.

So while she was able to join Rob for a lovely driving holiday around France during the school holidays she was unable to stay on and see Rob accept his trophy.

What are Heather’s favourite food pairings?

We may have mentioned this a few times before, but Heather can not go past something she has come to refer to as “CH cubed”… chicken, chips (specifically from the Stirling Chicken and Chip shop) and a lovely glass of Somerled Chardonnay!

It really is something!

She also loves the combination of Pinot Noir and duck. Especially if it has some sort of fruit in the preparation.

For Heather, Chardonnay and Pinot are the two most adaptable varieties when it comes to food pairings. She’d be very happy living with just those two.

Rob on the other hand would be lost without a big rich Shiraz. If you ask me, I think that’s because Heather rates the food just as much as the wine, whereas Rob would be happy with a big old glass of Shiraz and some fresh white bread and butter!

The one she jumps to first is one most of us would probably agree with… a big red with seafood.

Heather is also not a fan of sweet wine with a meal. While she enjoys the idea of it, she just can’t bring herself to end a good meal with a glass of sticky.

If you offered to pour her one in the afternoon with a nice biscuit, then that’s a completely different story!

What are Heather’s thoughts on cooking with wine?

Here is an interesting fact about Heather that I didn’t know… she has a real thing about not using wine in her cooking. She thinks there are much better things to do with it!

That reminds me of that famous W.C. Fields quote… “I cook with wine, sometimes I even add it to the food.”

But you won’t catch Heather doing that. She has a real aversion to the smell, especially white wine.

I questioned her about what she does if a recipe calls for wine? Not a problem for Heather… she doesn’t usually follow recipes anyway!

Which brings me to the question on everyone’s lips…

How does Heather come up with the delicious recipes that you find in your Jockey Club packs? 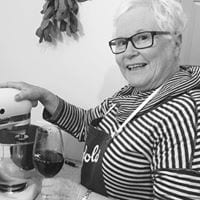 Well, firstly I should mention that Lucy does help… and even occasionally it doesn’t end up in an argument between mother and daughter!

In the early days, Heather relied heavily on those tried and true family favourites.

But those were exhausted long ago!

These days, Heather reads a lot of magazines and uses it as a good excuse to buy a new recipe book or three. Heather also loves to entertain, so anything that has been a hit with her guests gets earmarked as a potential club recipe.

The key to recipe selection is that it needs to match well with at least one of the wines in the club pack. It is then trialled two or three times before it is given the tick of approval.

What about those Anchovy Sticks?! 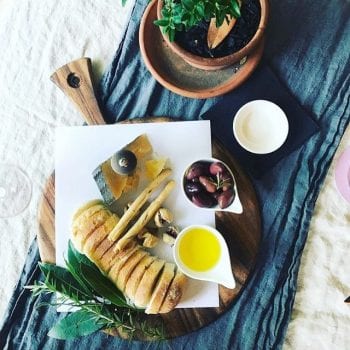 If you’ve ever visited the cellar bar and ordered our Signature Spanish Platter then you would know all about Heather’s famous anchovy sticks. They’ve become so popular that we even added them to the menu sans platter! People come from near and far to sit at the bar with a glass of their favourite and a serving of anchovy sticks (begrudgingly shared in some cases).

So where did the recipe for those come from…?

Well, between buying the property (which would become the cellar bar) and opening, the Moodys took a trip to Melbourne to get some ideas about food offerings.

One of the stand-out experiences was a meal at Cutler & Co in Fitzroy. It was preceded by a glass of flor fino sherry and an “anchovy stick” – a melt in your mouth fillet of anchovy in tempura batter. According to Heather, it was “heavenly”.

Although she knew the tempura would be hard to replicate, it didn’t stop Heather from coming up with a Somerled version which was easy to produce, simple to store and easy to eat.

And she certainly met that brief. Still made with love in her home kitchen she has now got them down to a very fine art. So much so that she’s able to multi-task. Brushing up on her French or face-timing daughter Emma in New York can all be done while whipping up a batch of anchovy sticks!

What do you mean you haven’t tried them??!

Make sure you pop into the cellar bar for your dose soon!

(and a massive apology goes out to all interstate readers who are salivating right now! As soon as we can figure out how to ship them with your wine, you know we’ll do it!)

Got more questions for Heather? Surely we can’t let her off this lightly?! Send your questions through for a follow-up post!