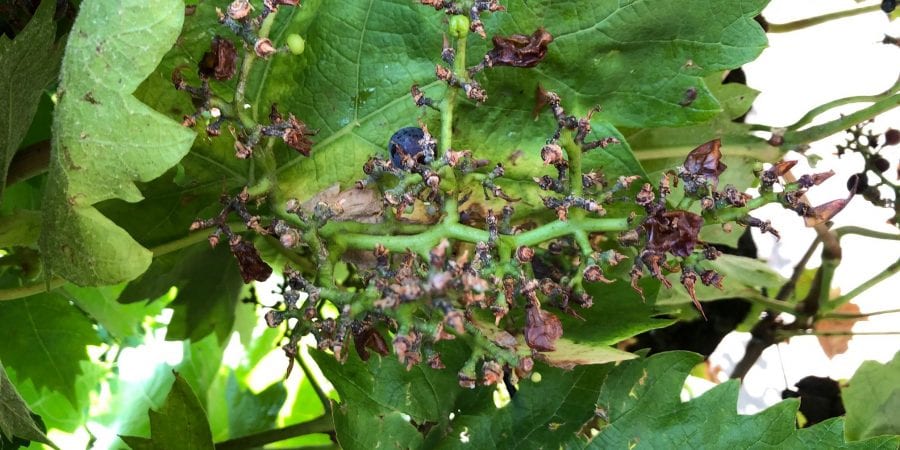 We’ve had a couple of good rainfall events over the last few weeks… which of course, is great news. But this added moisture (and accompanying humidity) brings its own set of challenges for our grape growers.

Let’s have a look at the major issues which can cause headaches during any vintage, along with what is happening right now in the Adelaide Hills.

We’ve talked about Downy Mildew before, so you can get heaps more information in this post over here.

Downy Mildew is a pain the backside disease. Once you have it in your crop you pretty much have it for life. The key to keeping it under control is to keep an eye on the weather.

Given the season so far in the Adelaide Hills has been really dry, there hasn’t been much of a risk of downy mildew.

The conditions recently have been conducive to a primary infection (that 10:10:24 thing I mentioned before). The great thing about it happening so late in the season, though is that it’s not really a massive problem for growers now.

If it had happened during flowering (like it did in 2018/19) then it would be a completely different story. 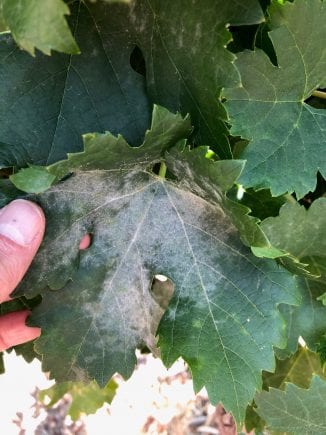 Unlike downy mildew, which lives and stays dormant in the soil, powdery mildew spores live on the grapevine itself.

The other key thing that differentiates powdery from down is that powdery mildew doesn’t rely on rainfall to infect the vines. Unfortunately, it grows best when the grapevines grow best. At around 22 degrees Celcius.

If the vineyard has powdery mildew spores (which most do), then the only way to prevent an infection is to spray the vines with fungicides such as sulphur.

It is the thing that keeps our growers busy throughout the whole growing season. To get complete protection, they need to spray every 10-14 days.

In the photo on the left, you can see a leaf heavily infected with powdery mildew. As you can probably guess, it severely decreases the leaf’s ability to photosynthesise.

In the berries, it slows down maturity and can give rise to splits in the skin placing them at risk of other diseases. 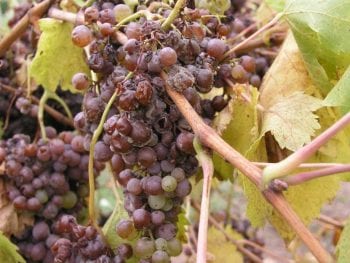 This is the one with the potential to cause problems for growers in the Hills at the moment.

Infection can be initiated from spores carried over from the previous season. The fungus can rest in a quiet state and then resume growth when the developing berry begins to soften. Once that happens it can then spread from berry to berry. This process is usually pretty quick especially in compact bunches of thin-skinned varieties. Botrytis also spreads readily from bunch to bunch in crowded fruit zones.

Botrytis needs about 8 hours of moisture to set off an infection period. It infects grapevine tissue via wounds and natural openings. So, think split berries, insect damage, powdery mildew infections and other physical damage. Spore germination is stimulated by sugars and amino acids in the ripening berries.

Here is a fun fact… botrytis grows 8 times faster in grape juice than in water!

So, obviously, now that the grapes are starting to ripen, it’s a really critical time for botrytis infections. Especially when you get significant rainfall events causing berries to split.

The only way to combat this one is to apply fungicides and to increase the aeration in the canopy. 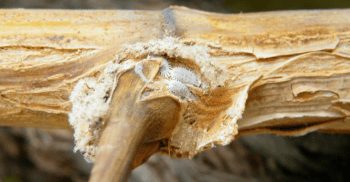 They prefer mild warm conditions with temperatures around 25°C and high humidity. So…. sort of exactly what we’ve got going on in the Hills right now!

Female mealybugs can lay large numbers of eggs, which quickly hatch into crawlers. Up to four generations may occur each year! Mealybugs overwinter as nymphs in the bark of the vine or even in trellis posts, before emerging in spring to feed.

Feeding by mealybugs does not usually result in economic damage. However, as they feed, they produce a sugary excretion or honeydew, which encourages the growth of sooty moulds. Sooty mould on vine leaves can reduce photosynthesis and mould on grapes can make the fruit unsaleable or lead to rotting.

One way to get rid of these guys is to encourage beneficial insects into the vineyard. Ladybirds in particular love a good mealy bug feast. 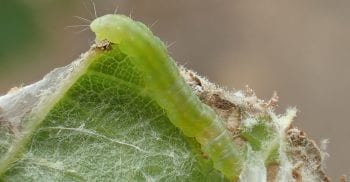 Insect pests are luckily quite uncommon in Australian vineyards but the Light Brown Apple Moth (LBAM) caterpillar, a native, can feed on the young berries, leaving scars for bunch rot fungi to enter the fruit.

LBAM larvae (caterpillars) will feed on both foliage and fruit of grapevines. Whilst the feeding damage on bunch stems, flowers and berries can directly reduce crop yield, the most significant impact is the increased risk of infection by Botrytis and other bunch-rotting fungi.

Again, the best way to combat these pests is to encourage beneficial insects. There is a particular wasp that lays its eggs in the egg mass of the LBAM. The larvae then feed on the LBAM eggs. Delightful!

There are actually some studies being done as we speak, to try to identify the best native plant species for attracting beneficial like these wasps to the vineyard. 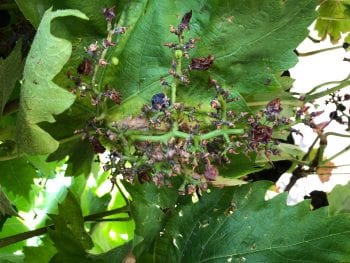 I think this picture says it all! Birds love grapes…

Red ones more than white. But they will basically eat whatever they can get their claws on.

The best way to deter them is to use nets or some of those strange bird scaring devices. Blow up owl anyone?

With the first of the Adelaide Hills fruit still a couple of weeks away from being ripe enough to pick, fingers crossed the weather is kind to us and the growers can stay on top of these challenges!