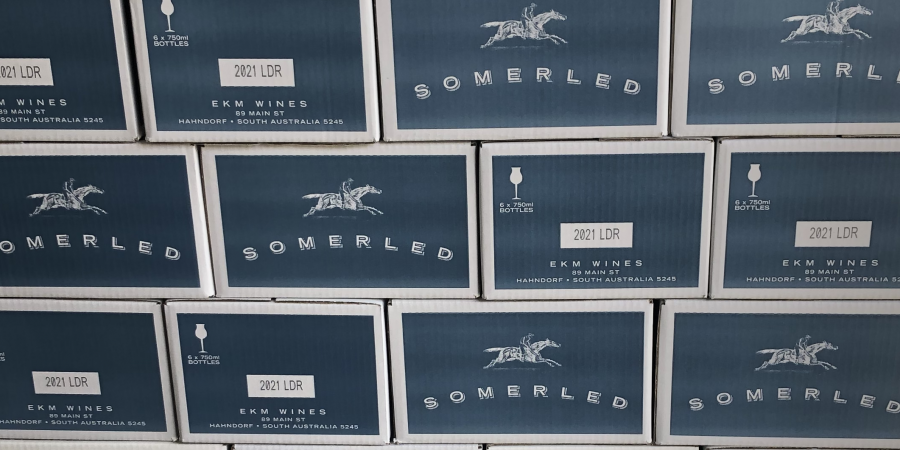 If you have, then you’d know just how fabulous vintage 2021 has been for growers all over Australia.

The quality of grapes was outstanding and the increased yields mean there will be plenty of 2021 wines for us to all enjoy over the coming years.

Well, for most small producers, yes… it’s fantastic news. Sure, there will be a bit more healthy competition in the market. But that’s never a bad thing.

But for the bigger producers? And the small ones who normally export a fair chunk of their wine to China…??

If you’re not familiar with what’s been happening with China and wine tariffs lately, here’s a quick recap…

Back in November 2020, China imposed provisional tariffs (ranging from 107% to 212%) on Australian wine. In April this year, they announced that these tariffs would remain in place for five years.

Tariff: A tariff is a tax imposed by a government of a country on imports or exports of goods. Besides being a source of revenue for the government, import duties can also be a form of regulation of foreign trade and policy that taxes foreign products to encourage or safeguard domestic industry. (thanks Wikipedia!)

This came as quite a blow to the Australian wine industry with China accounting for 36.7% of wine export revenue.

Officially, China is saying that these high tariffs are “anti-dumping measures”. Dumping is when goods are sold below a normal value — for example, below the cost it takes to produce them — which gives producers an advantage over the foreign markets they sell to. And the Chinese are currently investigating Australia for doing exactly that.

There are apparently a whole host of “non-trade reasons” why China isn’t happy with Australia. And it’s these reasons which are being blamed for the high tariffs, including…

A Chinese official has been quoted as saying… “If you make China the enemy, China will be the enemy.” Not the sort of thing you want to hear from one of your biggest trade partners!
Whatever the reason, exporting wine to China will be practically impossible for at least the next five years.
So, if you normally export wine to China and you’ve just had a bumper vintage, you’re probably going to be left with a heap of wine that needs a home.

The numbers are in…

Last week, Wine Australia published its 2020-21 financial year export report.  Here’s what it had to say…

This means that (unsurprisingly) we exported less wine and the value of the wine we did export was lower than in the previous year. Considering the increased tariffs only came in halfway through the 2020-21 financial year, that’s a pretty significant reduction.

According to wine Australia, there were two key factors attributed to the decline… the tariffs and the cumulative effects of three consecutive lower vintages in 2018, 2019 and 2020. This meant there was less wine available to export.

What to do with all the wine

If China doesn’t want it, and we’ve had this amazing vintage that has produced large amounts of great quality wine, who will drink it all??!

Well, I dare say we Aussies will give it a fair go!

But we can only drink so much… and our wine industry relies on the $$ earned from exports.

Luckily, we’ve been busy making some inroads into other markets. According to the Wine Australia report, exports to the UK, Singapore, South Korea, Malaysia, Taiwan and Hong Kong have increased by a combined $240 million.

Exports to the UK were at their highest level in a decade. The value of exports increased by 23% to $472 million and volume by 16% to 269 million. This made the UK the biggest destination for exports by volume and the second by value.

Overall, excluding mainland China, exports increased by 12% in value to $1.96 billion and increased by 6% in volume to 643 million litres.

While this is great news, it’s still not enough to offset the decline in exports to mainland China.

Here’s a great visual which clearly shows that… 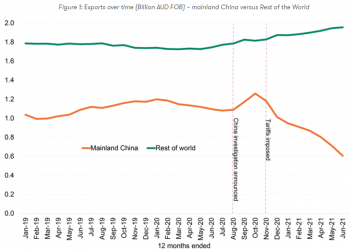 … exports to the rest of the world (green) are increasing, but not at the rate the exports to mainland China (red) are decreasing.
And with all this great 2021 wine about to hit the market, we may not have seen the full effects of the increased tariffs yet.
Fingers crossed we can continue to diversify and grow exports into other markets. Otherwise, we’re* going to have a lot of wine to drink!!
* not “us”, obviously… we only drink Somerled!

4 Replies to “Taking the good with the bad…”