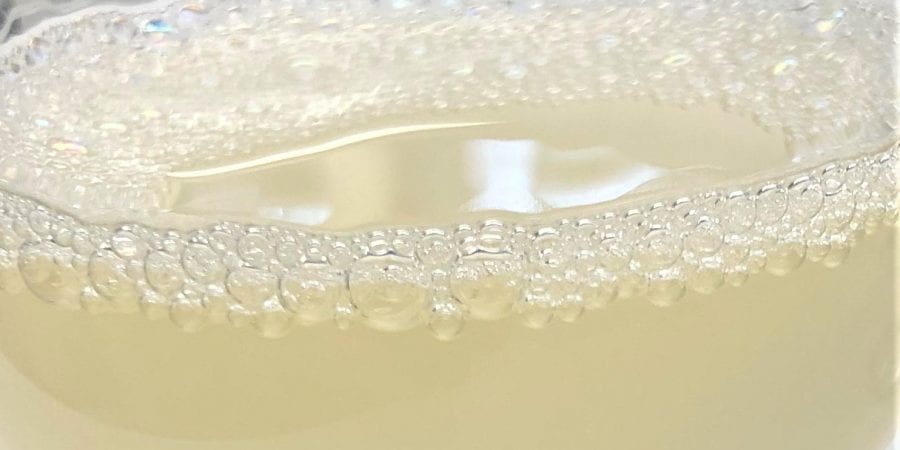 will be on your lips in a few years time – it’s our shiny new Somerled Sparkling 2019!

You can’t smell or taste from there (yet) but Rob has only one word: “Delicious!”

We’ll add a kept barrel of the same wine from 2017 for complexity, then do the fining, racking and cold stabilising –

Then she’s in bottle where bubbles will be imminent, as Rob prepares the winery to start her off on second fermentation.

We wish her well while she starts her sparkling journey! We’re all behind you dear!

Pretending We Are in a Greek Summer

What we LOVED about our Greek and Australian wine tasting in our Cellar Bar last Sunday is that each Greek wine had a surprise for us.

The aromas of each of the four wines were SO different to their flavours on the palate. 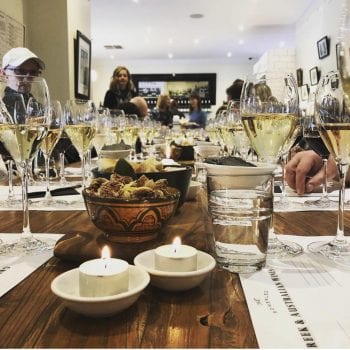 Sommelier Clare Aslanidis described this as being a feature of many of their indigenous varieties of wine – of which they have around 350.

There’s good evidence that one of the varieties we tasted – the Limniona – was happily being grown in Greece 3,000 years ago!

These ancient varieties are being reproduced by locals in an effort to keep them alive and thriving, though many are now extinct.

Pretty strict regulations mean that, say, fruit indigenous to Crete (such as the white wine Plyto, which we tasted first), is allowed only to be grown and produced in Crete, and so on for every region.

While picking up on the indigenous varieties for commercial production is more recent, it was in the 1970s that Greece started planting the French varieties Shiraz, Cab Sauv, Chardonnay and Merlot.

A very few, especially in the North of Greece, are trying their luck blending indigenous and those new French varieties, to interesting effect!

In this way, Greece is possibly the only country in the world that can be described as making wines that are both Old World and New World!

If you’re loving this and simply want this blog popped into your inbox on the weekly, write your name here.

And the name of that wine friend who’s always trying to outdo you at discovering winey things juuust here. Risk-free one-upmanship.

Back to the Surprising Part

So! Clare and Rob talked a lot about this.

In Australia, almost always the aromas in the wine follow through into the palate.

Complexity comes in the form of texture, length, bottle age and general integration of flavours.

But so many indigenous Greek varieties have totally different characters on the palate than one would expect – leading to little exclamations at our tasting table every 30 seconds!

Clare also spoke of Greek wines being very structure-driven, whereas with our beautiful growing conditions and French varieties in Australia, ours are largely fruit-driven (as a very over-arching rule).

In describing them as structure-driven, Clare means generally acid-and-tannin driven, rather than solely fruit-driven.

And what’s the most excellent thing about this?

This structure means it stands up to all of that DELICIOUS lemon, salt and garlic in Greek cuisine. We know – we tested it. Clare’s mother in law made her traditional tzatziki and skordalia for our special tasting, and stand up to those fabulously garlicky dips indeed they did!

Greece doesn’t have a cellar door culture like Australia does.

The truth is, they don’t really drink as much wine as we do.

You’ll see them line up glasses of tsipouro (‘sip-ooroo’) – something like a Greek grappa – much more often than you’ll see them opening up a bottle of red.

Rather than shots of tsipouro, though, Clare says, they have a 200ml bottle, a glass of ice and a jug of water on the table. They then mix it to their liking, and sip on it as they eat meze. The ice and water bring down the alcohol content, thus bringing out the flavours!

Clare explained that really, although winemaking in Ancient Greece was prevalent (just like in Ancient Rome, if you remember our history post from a few weeks ago), since then the area that we now recognise as Greece has been under occupation so many times that this winemaking culture has gradually been lost.

Ottoman rule centuries ago meant wine taxes were too high to produce wine profitably, and more recent civil wars in the 1800s meant so many remaining vineyards were destroyed.

Things crept back up in the Greek wine industry with the phylloxera outbreak in France leading the French to look towards Greece for their wine supply. Hence, as we mentioned before, those French varieties were studiously being planted in Greece at that time and for that reason.

Now in very recent times, during the Greek economic crisis, the government had an ideas moment and realised that wine was big business in Europe, and upped their international marketing.

Now, Germany and New York are the biggest importers of Greek wine (random!) followed by Australia.

Final Word – the Women Have It

There’s very little machine harvesting in Greece. So just who is responsible for picking all those grapes?

The women of course! It’s all about the care and attention to detail … true story!

PROOF  that it is TRUE that our first Somerled Cabernet Sauvignon is on the way for a big journey to the bottlers. This is Rob yesterday in front of the wine itself, just after signing off on it: 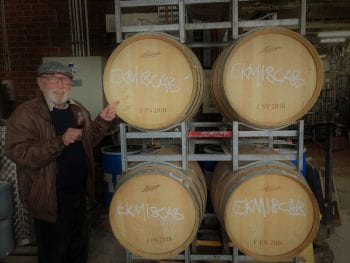 It is also TRUE that the code on the barrels shows the incorrect vintage – it’s actually a 2017 rather than an 18.

The EKM in the code refers to the initials of the other Moody daughter Emma (middle name Kate), who started this business with Rob back in 2001. Part of our company is thus named.

Rob will drive up after the wine and make sure that everything is lovingly and expertly done on bottling day. Anyone who’s ever spoken to Rob in depth about making wine will know that he never relaxes until that wine is in bottle!

Cheerio for now – please do keep in touch and get your BURNING QUESTIONS ANSWERED by commenting or flicking us an email!