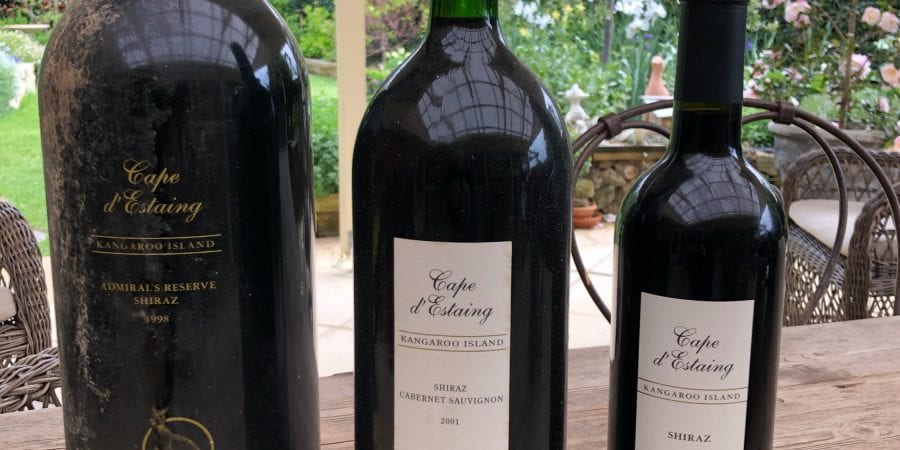 And I know I have been using the word “exciting” a lot, but this REALLY is!

Rob has been cleaning out his cellar and has found some fabulous wines which he can’t possibly put to good use all by himself (although I’m sure he’d give it a good go). In true Rob style, he has generously decided to share some of his finds with YOU!!

That’s right, straight from his cellar, Rob has decided to release his collection of Cape d’Estaing wines. And he is giving you first dibs!

HUH?! What is Cape d’Estaing and why should I be excited about it?

Some of you may be familiar with the Cape d’Estaing story, but those of you who aren’t here is a quick recap…

Back in the early 90s Rob and Heather were convinced, by friends (probably over a glass of wine or two!), to grow grapes on Kangaroo Island.

Rob had always been adamant that he didn’t want to get involved in growing grapes. It’s a tricky thing to do and he didn’t really have the expertise.

When a site on the North coast of Kangaroo Island (3km in from Emu Bay) came up, he could see the potential. The unique location of the vineyard meant that even on those hot north wind days, the wind would be coming off the sea. That means it would be degrees cooler and not have as much of an impact on the grapes. Rob thought there was a chance that it could be something very special. And could produce quite distinctive wines.

So, in 1993 Rob and Heather, along with three other couples bought the site for a reasonable price.

And so began the arduous task of planting the vineyard which was made up of 50% Shiraz and 50% Cabernet Sauvignon vines.

These varieties were specifically chosen for a couple of important reasons. First, it had to be a red variety. The fruit wouldn’t be processed on the island, so it needed to travel well. As it turned out though, the travel time between vineyard and winery (a contract facility in McLaren Vale headed up by Mike Farmilo) was at worst 12 hours. In hindsight, they could have probably planted a white variety.

The owners, and in particular Rob, were also keen to see how some classic varieties performed in that climate. In particular Cabernet and Shiraz.

Planting was completed in 1994 and the first vintage to come from Cape d’Estaing was 1998.

And boy… what a vintage it was!

There is often a belief that old vines make for better quality wine. But as Rob and his partners quickly discovered, this just wasn’t the case for this particular vineyard. Their first vintage was (in Rob’s words) “spectacular”!

Originally the group was planning on just growing the grapes and selling them to interested parties.

However… it soon became obvious, especially when they saw the quality of the first lot of fruit, that they should make it into wine and then sell that in bulk.

Two days into fermentation the wine was looking spectacularly good so they decided to hang onto it. In fact, it was so good that other people caught wind of it and started making approaches to buy the wine. That certainly made the group’s decision easier… “well, if it’s that good we should definitely keep it for ourselves!”

The group then found themselves having to make decisions about a brand name, artwork, labels, etc…. a time Heather admits was “the closest she has ever come to having a nervous breakdown!”

And the rest is history… 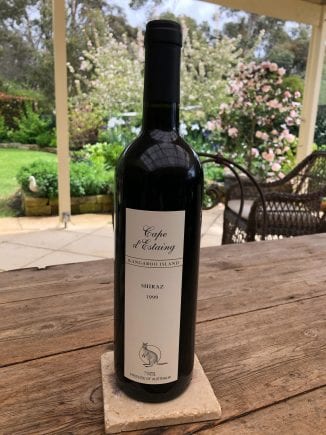 The group continued to produce great quality fruit and sensational wines until 2008 when they decided to sell the vineyard.

They had great success selling straight Shiraz and Cabernet into the USA along with a Shiraz/Cabernet blend into Europe. There were some word-of-mouth sales here in Australia, but the rest was happily consumed by family and friends (or ferreted away in wine cellars!).

Ideally, they should have had a retail outlet on the Island, but none of the parties were interested in getting involved to that level. With Rob still working for Penfold’s at the time and other “day jobs” taking up time, this was more of a side project for all involved.

After the vineyard was sold (and sadly left to its devices after a few years) the brand was also sold in 2008. If you happen to come across any wines labelled under the same brand then, keep in mind that they were not made by Rob and friends and were made from grapes from a different vineyard and region.

As fate would have it, Rob’s earlier prediction that the vineyard could be something quite special turned out to be true.

The grapes ripened nice and early (so less chance of the weather having an adverse impact) and the yields were low. The fruit produced very rich and full wines.

The cabernet is varietally very distinctive. You definitely know its cabernet.

The Shiraz has that lovely rich pruney, plummy character. Rob describes it as “McLaren Vale but even more so”.

The fruit consistently produced beautifully attractive wines. A sommelier in Baltimore once told Rob that the 2004 Cabernet was “the best cabernet in the world”. One man’s opinion, I know, but still…!

All of the partners liked the idea of making a sparkling red. So, beginning in 2001 some of the cabernet was made into sparkling (because the USA market preferred the Shiraz, so they had some cabernet to play with!).

Somethings to keep in mind…

These are very old wines. They’ll need a good decant when they’re opened. Most (if not all) of them will have a significant “crust”!

While Rob has always had a really good run with the corks they used (probably because they’re about as expensive as you can buy!) and the wines have developed really well. But it is simply impossible for us to guarantee each and every bottle.

As you can see, we have some labelled wines as well as cleanskins. The cleanskins are only that way because they ran out of labels!

You’ll also notice some wines are referred to as “Admiral’s Reserve”. This was the name given to the standout wine from each vintage.

And finally, the “Single Bottle Box” refers to a lovely wooden presentation box complete with Cape d’Estaing logo. Free of charge with that wine.

How do I get my hands on these extra special wines?

The wines will officially go on sale at midday (Adelaide time) on Tuesday 29th September.

Mark it in your diary.

We will not be taking any pre-orders and it’s first in best dressed!

An email will be sent to your inbox at 12pm (Adelaide time) on Tuesday with instructions on how to purchase your selection.

Do we have your correct email address? Please let us know if we need to make any changes or if you would like a different email address added to our mailing list.

3 Replies to “Rob is feeling generous!”