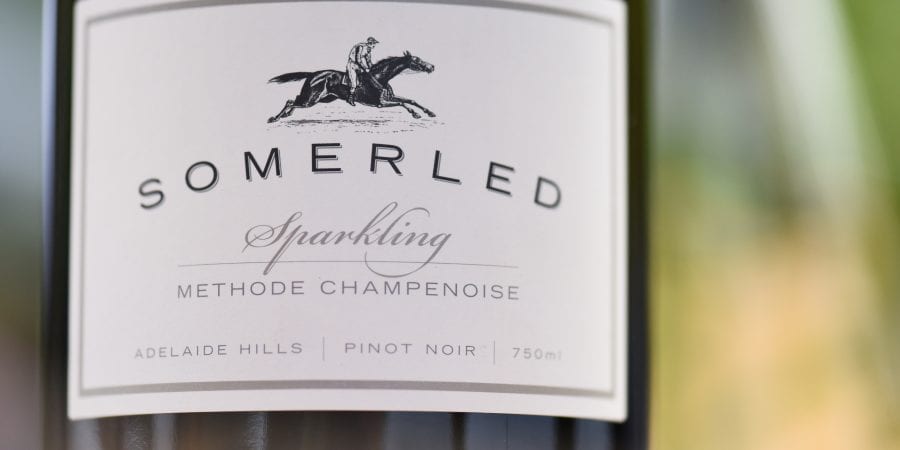 …but, don’t just take our word for it – our customers think so… oh, and the judging committee of the Adelaide Hills Wine show agree as well! They awarded our 2014 Méthode Traditionelle Pinot Noir the trophy for the best Sparkling in Show of 2017.

We’re currently pouring our way through the very last batch of 2014 at the cellar bar, but don’t panic… Rob is working on more as we speak! It’s the first fruit of vintage to come off the vine and head into the winery, but there are also other vintages in the pipeline. Let’s have a look at where they’re all at. First though, let’s get a few definitions out of the way…

Méthode Traditionelle: one of the ways to produce sparkling which creates the bubbles in the wine through a secondary fermentation in the bottle. Before it becomes Sparkling, the wine is filtered into the bottle… the same bottle that is presented for sale. A second round of yeast is added, along with sugar to start the second fermentation. The bottle is then crown sealed to trap the carbon dioxide (ie. your bubbles) produced. This is the process used for the production of Champagne.

Lees: deposits of dead or residual yeasts from the secondary fermentation

This vintage is sitting on yeast lees, with the first batch to be disgorged very soon. This is the next batch heading for your glass once the 2014 has sold out, which will only be a few months away – it is being consumed enthusiastically since the win!

Also on lees, developing those lovely flavours we all love in Rob’s sparkling. It will stay this way until we’ve sold out of the 2015 vintage which is at least another 12 months away. It’s also important to note that Rob disgorges in batches (depends on volume, but between 2-4 batches). This means that some of the bottles from each vintage will spend longer on lees than others, allowing more time to develop those flavours.

This one has only recently been bottled and is currently going through secondary fermentation in the bottle to create those tiny delicate bubbles we all love so much. Each individual bottle has quite a lot of yeast in it and the fermentation process creates over 5 bars of pressure (that’s a lot!). It will stay this way for a least a couple of years. The next time you enjoy a glass of our Sparkling, make sure you appreciate those bubbles… it’s taken a lot of work to get them there!

Rob visited the vineyard yesterday and has the following to report… 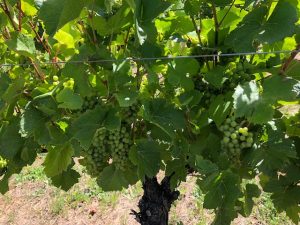 Vines looking good even after the heat of the past week. They look fresh and the leaves are glossy. The nighttime temperatures have been really low since the two or three very hot days over the weekend, which helps. The vines on the block we pick the grapes for the sparkling are “dry grown” and get no irrigation at all (unless they absolutely need it – the grower has a bore).

“Dry grown” grapes are usually smaller, denser and more flavoursome. The practice requires rootstock that will seek the moisture deep in the soil (not just on the surface). Vines must be spaced sufficiently to get all the moisture they can (to decrease competition for water). And the correct soil mix is crucial to prevent moisture from escaping. Grapevines are pretty hardy, but this method requires a lot of intense hands-on work.

Berries are modest in size 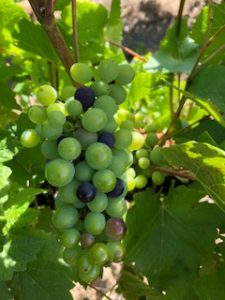 and are still hard as nails. Almost no sign of veraison (other than what is pictured here), so it looks like it will be another week or so away. The grapes won’t be ripe enough to pick for Sparkling until around 3 weeks after that, so in early March (a little later than average) we will be plucking this bunch from the vine! Literally… the grapes for our Sparkling are hand picked, which means Rob can be fussy about exactly what goes into the press. There is no sign of disease but he has noticed some shrivelled berries (perhaps just physical damage) which can be avoided during the hand-picking process.

We have so many more fascinating things to tell you about Sparkling. Keep tuning in for the answers to these questions and many more…

What would you like to know? Post your questions below and we’ll answer them in future posts.

Missed last weeks post on what else is happening in the winery? Catch up here.