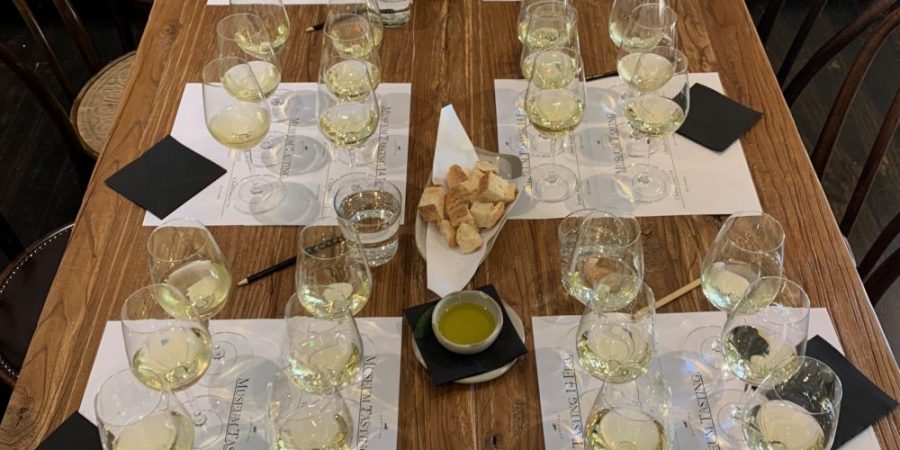 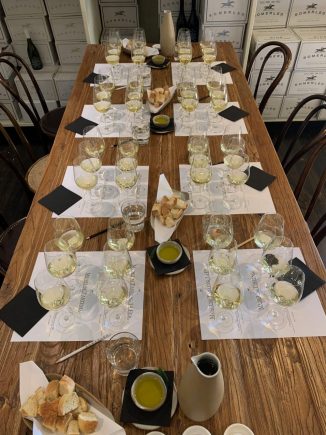 On Sunday, we happily welcomed a small group of Somerled fans to our first vertical tasting for 2021.

And what better way to start the year than with some Museum Fumé Blanc and Chardonnay!

And the verdict? Here are some of Rob’s thoughts on each of the wines (along with some interesting questions which popped up along the way)…

The 2011 vintage was notoriously bad. Heavy rains throughout the last part of the season created ideal conditions for downy and powdery mildew. But it was Botrytis bunch rot which was the main concern.

Kim Anderson and his team did what they could when picking our 2011 Sauvignon Blanc fruit. They meticulously avoided any fruit showing signs of bunch rot and much of the harvest ended up on the ground. With pickers paid by the hour and such a small percentage of fruit salvageable, they eventually had to give up. It got to the point where Kim was happy for us to go in and pick what we wanted at no charge!

As far as the wine goes… Rob was excited by the vegetative notes still present even after 10 years. The lovely lifted flavours conjured up cravings for some kind of fresh pea and broccoli pie (hmmmm… ok…). Once everyone got over that announcement, it was agreed that this was a very unique fumé due to vintage variation.

Compared with the 2011 version this Fumé Blanc was noticeably creamier and richer. It still had obvious sauvignon blanc passionfruit characters, but even more pronounced malolactic flavours.

Creamy, delicate and in fact has a bit in common with the Fumes (compared with the other chardonnays!!)!

Rob loved the malolactic flavours and the nice buttery aromas. It has very restrained oak on the nose – not new oak by any means.

Temperature-wise, how long should you wait to drink Chardonnay after you take it out of the fridge?

About quarter of an hour is fine. Always pour too cold rather than the other way around, as in most situations it’ll warm up in the glass (if it cools down you’re in a pretty bleak place!). Also, don’t be afraid to knock these Museum Chardonnays around a bit. Long term cellaring with screw cap can create a sulfidey note, so swirling it in the glass or decanting really lifts the true aromas.

This one immediately gave the impression of a riper, bigger, richer, more viscous and higher alcohol wine in comparison with the 2013.

But Heather, is it the ’13 or ’14 which goes better with Stirling Chickens?

(We all know Heather’s favourite food and wine pairing is a glass of Chardonnay with roast chicken, chips and coleslaw from the Striling Chicken shop!)

My final vote for the overall favourite is the 2014. Having said that I thnk the 2013 will cut through the fats of the chicken meal so nicely that the “chicken-matching” vote is for the 2013.

The level of oak in the 2015 (as was the case with the 2014 and 2016 to come) is immediately more obvious after the 2013 version. Rob admits that wasn’t a conscious change. He loved the warm lifted oaky notes and thought there was a nice balance between the Chardonnay fruit flavours and the spicy French oak.

The 2015 (and 2016) show lovely nutty cashew flavours from the malolactic fermentation.

This chardonnay was particularly round, viscous and mouth-filling compared with the others!

And Rob’s final verdict? “The 2016 wins for me! That’s my very favourite on the table today”.

The consensus was that this was so far the best thing to come out of 2020!

And the winner is…

Well, the overall favourite of the day at least was a tie between the 2012 Fumé Blanc and 2016 Chardonnay! It’s usually the older chardonnays that get the votes, so if you have any 2016 stashed away, then you’re onto a winner!

And if you don’t and would like to try it or any of these wines for yourself, let us know… we have just enough left to share!

Some more questions from the fans…

Why did I used to hate Chardonnay, but now I don’t?

When I started at Penfolds in 1969, there was about one acre of chardonnay in the whole of SA! We started making them in the late 70s and 80s. The flavour of a chardonnay grape is relatively bland compared with riesling (which we grew a lot of at the time).

To make sure we got a lot of flavour we would leave the grapes on the vine to properly ripen. When we couldn’t see much flavour in chardonnay it would be left on the vine to get as much as possible. This resulted in grapes which were around 13.5 or 14 Baume before they were picked.

While this is great for red wine, it just leads to a pungent, rich, overpowering and high alcohol white. Not everyone’s cup of tea!

When did you discover how to make it like the Somerled Chardonnay?

Neville Falkenberg was experimenting with components of what would be the Penfolds Yattarna Chardonnay blend (colloquially, ‘white grange’). I remember tasting one of the trial bins with Ian McKenzie. I’ve never forgotten the balance: really malo-y, very low alcohol (around 12-12.4%), lovely oak (quite a bit of it) underlying citrus peel chardonnay character and flavour.

I took a few bottles of it home and had one that night with Heather. I can’t remember if we got around to having dinner or not! It was then I realised that chardonnay had to be quite different from what we had been making at Wynns.

Why are some chardonnays gross and orange?

If the wine is under screwcap then it’s something wrong with the winemaking – it shouldn’t discolour. There is a chance the wine may have been on its way to oxidation before it was even bottled.

Another reason could be that it has been stored in very hot temperatures for prolonged periods of time. Inadequate corks can also allow oxygen penetration.

The Somerled Chardonnay is pretty pale. It will continue to get deeper in its tints over time, but very slowly.

Is it easy to get consistency from vintage to vintage?

It’s much easier to get consistency with the Sauvignon Blanc. With that one, you eliminate the smaller changes that come from things like the type and age of the oak, the amount of time in oak, the flavour of the yeast lees, the impact of stirring the lees, etc. etc. So many variables to control in an oaked wine.

And before we go, a quick…

According to last week’s CropWatch report, all varieties are at E-L 36 (berries with intermediate sugar values). And the way the weather has been this week (nice and hot and sunny), we’re getting VERY, VERY close to harvest! This puts us on track to similar timing to the last two vintages.

Further to our chat about rain and split berries last week, it looks like splitting in the region has been limited. This was thanks to the fact that most grapes were still in the early stages of ripening along with low levels of available soil moisture before those couple of recent heavy rainfall events. Phew!

Keep an eye out for next week’s blog when no doubt I’ll have news of our first harvest for 2021!