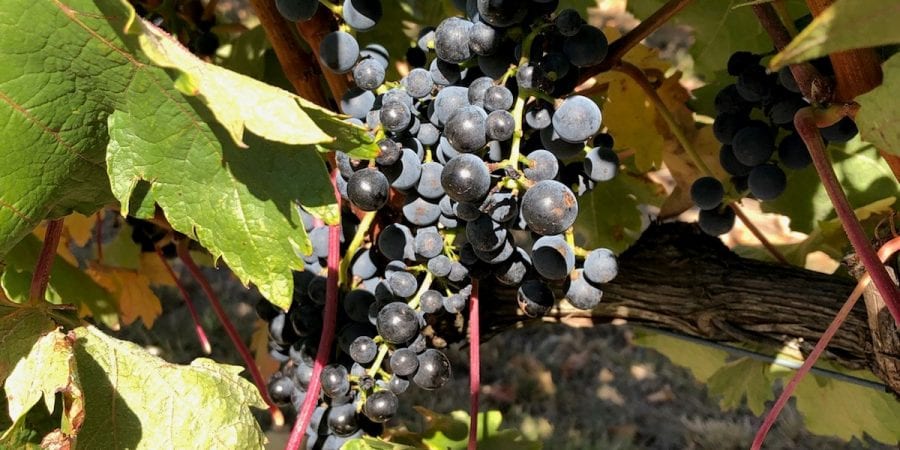 And if you promise not to tell anyone, I’ll fill you in.

There is a distinct possibility that Rob will be introducing a new variety to the Somerled stable! Maybe…

(Sorry all you Riesling fans up the back… unfortunately, it’s not what you’re thinking!)

Before I go on though, I need to make a public apology for lying to you all last week. I mentioned that all of the Adelaide Hills grapes would probably be picked by now. But… I know of at least one vineyard that still has fruit to pick.

And it belongs to our good friend Kim Anderson at Charleston.

He has a couple of lovely rows of Graciano which are yet to be picked.

And it has caught Rob’s eye!

After the terrible fires which devastated the Hills late last year, winemakers are having to think a little “out of the box” this vintage.  That way, we can ensure your cellars are full of top quality wines from the Adelaide Hills for years to come.

So what has Rob got brewing in the crafty mind of his? I’ll fill you in on his plans a little later on, but first… 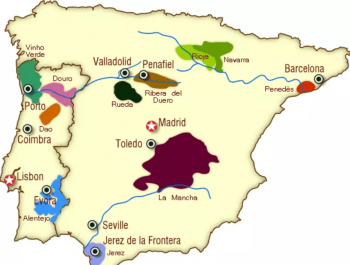 Graciano is a black-skinned variety from Northern Spain. It is mostly grown in the Navarra and Rioja wine regions (those green bits on the right-hand side of the map).

It’s not commonly grown in other parts of the world, although small quantities can be found in California and here in Australia. It is also grown in France under the name Morrastel.

The classic Spanish Graciano wine is moderately tannic, deeply coloured and intensely perfumed. It has aromas of mulberry, violets and chocolate.

Graciano’s intense flavours and aromas make it perfect for blending. In Rioja it is very popular with winemakers who use it to make the classic Rioja blend with Tempranillo and Grenache. Even when it is used in only small volumes, it has a definite influence over the finished product.

Unfortunately, Graciano can be a bit of a pain to grow. The vines are very low-yielding, which is probably the biggest reason growers chose not to plant more of them. They are also particularly susceptible to rot and downy mildew. In the 20th Century, many Rioja wineries uprooted their Graciano vines in favour of more fashionable grapes such as Tempranillo and Cabernet Sauvignon. Happily though, the variety is regaining popularity.

We’ve been growing Graciano in Australia for 100 years. Brown Brothers planted vines in the King Valley (Victoria) in the 1920s. While we still don’t grow a lot of Graciano, it can be found all over South Australia and in Margaret River in Western Australia.

Now, back to Rob and his plans…

This is what he had to say when I asked him to share his thoughts: 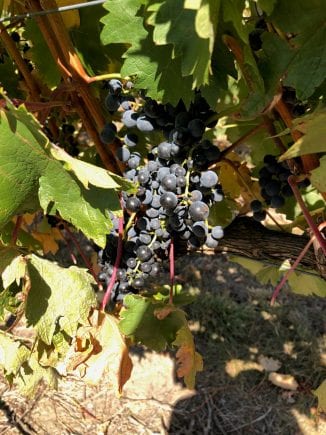 “I haven’t made a Graciano before and have tasted only one that I remember. BUT, this wine did make me sit up and take notice!  It was Kim Anderson’s 2019 Graciano.  What I have in mind, is to make a wine similar to that…

“Medium to deep colour, quite bright and an attractive youngish red colour. The nose was really what got me interested – it was lifted, flowery (a bit along a really nice, young Grenache) but somehow deep as well.  No oak to speak of and not developed.

“The flavours followed suit with medium weight and a lovely softness that gave the young wine great drinkability. It was probably a bit bigger than our Pinot noir, but not much…”

Now, he does add a caveat that, depending on the fruit, it may end up being a bit richer than that. But either way, I’m sure it is going to be delicious.

The tricky thing now is, we are getting pretty late in the season. The ripeness of the fruit was heading up to where both Kim and Rob were happy with it, but then we got a significant amount of rain last weekend. That pushed it back down again. Also, the mornings are starting to get cold. We’re still getting some nice warm days though, so that’s a positive.

If by chance they can’t get the ripeness they want, Rob can see it being a really lovely blender for our Tempranillo! And that in itself would be pretty exciting as well!

All I can say is watch this space!