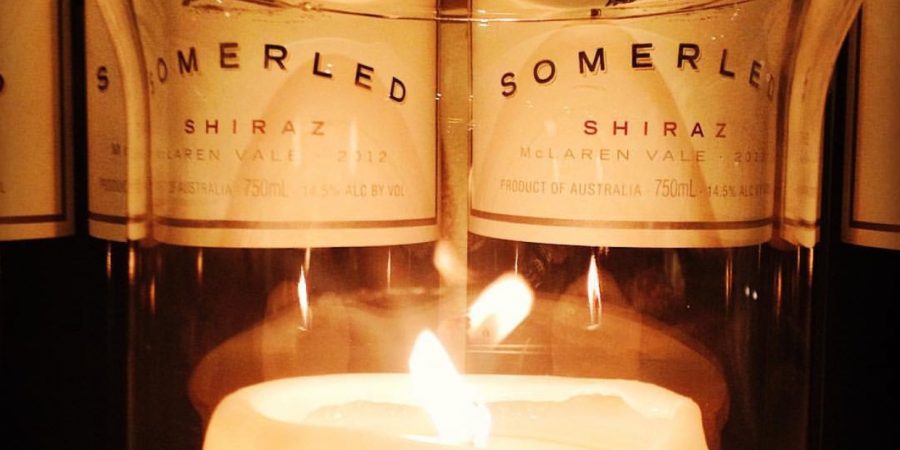 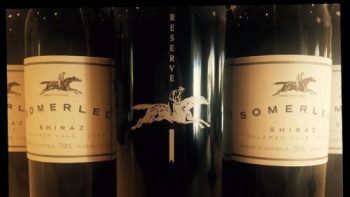 And although it may be hard to believe, Australia’s most prolific variety has only had a “day” since 2020!

Turns out “Syrah” has had a day for ages (16th February), but “Shiraz” did not (we’ll get to the difference between the two in a bit).

So, a Sydney-based marketing company decided to give it one!

Whether it has a day or not, there is no denying that Shiraz is one of Australia’s most established and loved varieties.

SHIRAZ: THE STORY OF AN AUSTRALIAN LEGEND 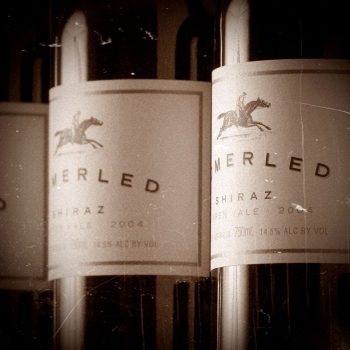 Almost universally planted, Shiraz has it all!

Capable of everything from affordable, quaffable BBQ reds to magnificent, age-worthy classics that are truly world-class.

Shiraz was one of the original varieties planted in Australia and instantly flourished in its warm, dry climate.

Shiraz is grown in 60 of 65 Australian wine regions!

Australia boasts some of the oldest pre-phylloxera Shiraz vines in the world. Ironically, French wine researchers and winemakers now travel to Australia to source vine material to take back to France.

IS IT SYRAH OR SHIRAZ?

Australia adopted the name Shiraz in the mid-19th century. This variety is called Syrah almost everywhere else in the world.  But due to its enormous commercial success on the international market, producers from Australia have chosen to label their own wine “Shiraz”.

Exactly how Syrah became Shiraz remains somewhat of a mystery. Some say it’s because the original cuttings were incorrectly labelled. Others say it’s simply the strong Australian accent…!

Some Australian winemakers have recently endeavoured to produce medium-bodied wines more European in style, choosing to label them Syrah to differentiate them from richer, fuller-bodied Shiraz styles.

THE HISTORY OF SHIRAZ IN AUSTRALIA

While the exact origins of Australia’s first Shiraz vines are subject to debate, we know they arrived as cuttings in the early 1800s. Shiraz then made its way from New South Wales to other winemaking regions of Australia.

It soon became clear that Shiraz thrived in the diverse range of climates in Australia.

The first wines to come from Shiraz cuttings were often labelled Hermitage after the renowned French wine AOC (Appellation d’Origine Contrôlée), seen by some as the spiritual home of Shiraz. 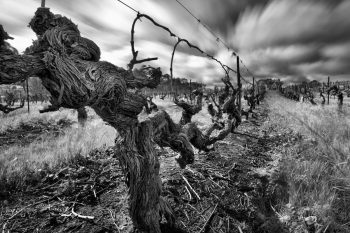 Shiraz vines were planted in regions like the Hunter Valley, Barossa, McLaren Vale, and Nagambie Lakes and Great Western
in Victoria. Some of the vines are still producing fruit today and represent the world’s oldest continuously producing
Shiraz vines.

Christian Auricht migrated to Australia from Prussia in 1830s. He established one of the Barossa’s first trading villages – named Langmeil. This historic site is now home to Langmeil Winery and their ‘Freedom’ vineyard. They claim it was planted as part of his mixed farm in 1843. 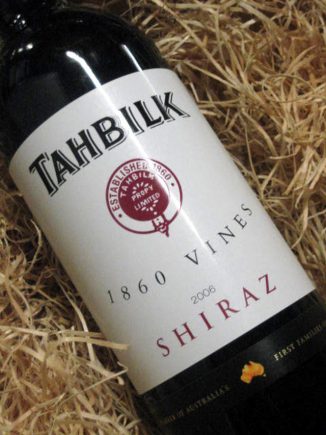 Tahbilk was established in Victoria’s Nagambie Lakes region. Shiraz was planted and survives to this day with the Tahbilk’s ‘1860s Vines’ Shiraz crafted from these grapes.

Australian producers adopted the name Shiraz in the mid-19th century and soon popularised it as an internationally accepted term for the variety.

Henry Best planted Shiraz and other varieties in his Great Western vineyard in Victoria. These vines continue to thrive today.

Shiraz continued to prosper in almost every corner of the country. Its suitability for table and fortified wine in Australia’s various climates, topography and soils superseding other varieties.

However, it wasn’t until the mid-to-late 1900s that single-variety labelled Shiraz wines began to make their way into the glasses of Australians. International drinkers also began to embraced this style through an emerging export market.

Shiraz made its move to become the most popular wine in the country.

When official measures of grape crush were recorded in the 1950s, Grenache held the highest red grape crush number with 21,200 tonnes, while Shiraz took second place with 12,400 tonnes. But by 1976, as the red wine boom began to gain momentum, Shiraz usurped Grenache with a crush figure of 72,200 tonnes!

Australian Shiraz found favour with its approachability and full-flavoured fruit.

The affordable, commercially produced Shiraz was often sold with quirky, colourful labels. The Shiraz export boom took hold with the popularity of Australian Shiraz soaring in international markets, including the US.

In the United States, consumers were guided by one of the world’s most influential wine voices, Robert Parker Jr. of Wine Advocate. Parker praised the intensely bold flavours and characters of Australian Shiraz, awarding 100-point scores to wines such as Penfolds Grange.

High Parker scores were regularly given to Australian wines made from riper fruit, deep in colour, high in alcohol and matured in toasted new oak. These wines were extremely popular, often commanding premium prices. But consumer preferences eventually began to shift towards lighter-bodied, restrained examples.

Everyday-drinking Shiraz were led by the ‘critter wine’ movement, heralded by Casella Wines’ Yellow Tail label, which
became a huge export success. As a result, plantings of Shiraz rose substantially. While blockbuster Shiraz was still being
made, with inky depth and syrupy richness, tastes were increasingly appeased by a more moderate, easy-to-enjoy style.

In response to the boom of the late 20th century, the market shifted slightly, encouraging Australian winemakers to craft
more moderately flavoured and textured Shiraz styles.

Cool-climate Shiraz began to build a reputation as one of Australia’s finest wines. Stand proudly alongside traditional, rich, warm-climate styles of Australian Shiraz that were already enjoyed all over the world.

Today, Shiraz leads the charge as the country’s most widely planted variety. It positions Australia as a world-class producer with its cool-climate expressions that allow regional distinction and varietal purity to be revealed, as well as fine examples of big-flavoured richer, riper styles from warmer regions.

As most of you would know, Rob started his winemaking career under the guidance of the great Max Schubert. He was the creator of the world-famous Penfolds Grange Hermitage.

The story of Shiraz in Australia would not be complete without a mention of him..!

THE STORY OF MAX SCHUBERT AND GRANGE 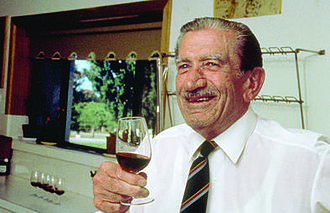 Max Schubert was a pioneer. He set out to put Australian Shiraz on the world map. And despite being thwarted along the way, he succeeded by producing Australia’s most famous wine, Penfolds Grange.

The history of Australia’s Shiraz success can be attributed to the efforts of this visionary winemaker.

In 1951, inspired by a visit to Bordeaux, Schubert set out to make the “Great Australian Red”, combining traditional Australian techniques, inspiration from Europe and precise winemaking practices. His aim was to create an Australian wine “capable of staying alive for a minimum of 20 years and comparable with those produced in Bordeaux…”. But, as the varieties that make up the red wines of Bordeaux (Cabernet Sauvignon, Cabernet Franc, Merlot and Malbec) were all in very short supply in Australia, he decided the wine would be made from the more readily available Shiraz. He also developed a revolutionary technique by maturing his Shiraz in new American oak casks. When he presented the wines to Penfolds management seven years later, he was ordered to cease production. But Schubert continued his work in secret, hidden in the cellars of Magill Estate in South Australia.

In 1960, a new wine, Penfolds Grange Bin 1, hit the market to great critical acclaim and instant commercial success. With renewed confidence, Penfolds head office ordered Schubert to resume production of this groundbreaking wine. They discovered he hadn’t missed a vintage (sneaky!), and Penfolds subsequently released the 1952 vintage to the public.

Penfolds Grange has become one of the world’s most iconic, collected and revered wines, and proudly carries the mantle of “Australia’s Greatest”. Penfolds Grange is still made predominantly with Shiraz, with most vintages including a small percentage of Cabernet Sauvignon. 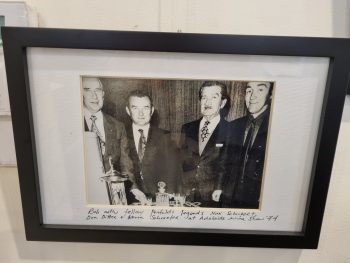 Our very own Rob Moody was in charge of making the 1971 vintage of this iconic wine!

Shiraz: Just what the doctor ordered!

Many of Australia’s early wine promoters were doctors, among them Dr Christopher Rawson Penfold, who arrived in Adelaide in 1844 and established Magill Estate. Penfolds’ first wines were available on prescription, thought to be of benefit to anaemic patients!

So, that’s my problem… not enough Shiraz!

I had need to empty our wine fridge the other day and stumbled across a well-hidden Somerled 2001 Shiraz!

If you need me, you’ll know where I’ll be…

One Reply to “Celebrating Shiraz”